Cowboys Stop Ekalaka To Improve To 2-1 For Season

The Cowboysâ€™ defense took charge from the start when solid plays by Colin Avance, Reese Moon and Kobe Nickoloff stopped the Bulldogs on their first possession. Taking over on the Ekalaka 33, Culbertson scored on its second play on a 26-yard run by Nickoloff.

Ekalakaâ€™s next possession ended when a tackle by Mark Kirkaldie stopped Kaleb Frye on a fourth-and-two rushing attempt. After a nice run by quarterback Bridger Salvevold down to the three, Nickoloff scored for a 12-0 lead with 6:39 left in the opening quarter.

The Cowboys added a touchdown a couple of minutes later when Salvevold broke loose for a 35-yard touchdown run. The sophomore also ran in the twopoint conversion for a 20-0 lead.

An interception by Nickoloff was returned to the Ekalaka three to set up Culbertsonâ€™s next touchdown. Justice Bengochea battled in from the three for a 26-0 advantage with 1:22 remaining in the period.

The running attack featuring Nickoloff and Carson Solem led the Cowboys deep into Ekalaka territory early in the second quarter. A fouryard dash by Solem resulted in a touchdown with 10:55 left in the half. Salvevold scored on a conversion run for a 34-0 margin.

The Bulldogsâ€™ next possession was stopped by Payton Perkins, Avance, Nickoloff, Bengochea and Salvevold. Starting at the Ekalaka 32, Culbertson went on to reach the end zone on a 16-yard pass from Salvevold to Moon to put the margin at 40-0 with 8:05 left in the half.

Culbertsonâ€™s final touchdown of the half came on a 40-yard pass completion from Salvevold to Perkins with 1:47 remaining. Nickoloff ran in the two-point conversion for a 48-0 advantage.

The Cowboysâ€™ next touchdown came on a 13-yard pass connection between Salvevold and Bengochea with 3:51 left in the third quarter. Solem ran in the conversion for a 56-0 lead.

Ekalaka got on the scoreboard when Wyatt Melton returned the ensuing kickoff 67 yards for a touchdown.

The Cowboys ended the scoring with a 44-yard touchdown run by Solem with 1:03 remaining in the third quarter.

Leaders for Culbertsonâ€™s rushing attack included Solem with 112 yards and Nickoloff with 63 yards.

The Cowboys will head to Scobey on Friday, Sept. 16, for a key conference contest. 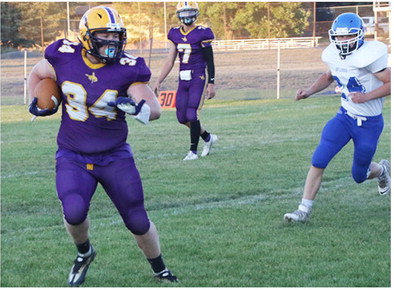 BengocheaCulbertsonâ€™s fullback Justice Bengochea takes off for a gain against Ekalaka. TheCowboys will travel to Scobey on Friday, Sept. 16.(Photo by Bill Vander Weele)