She feels the Lady Wolves need to continue improving on their defense.

â€śI felt like they were having fun, which is always good,â€ť McGowan said.

A kill by Jâ€™Elle Garfield and a great save by Katelyn MacDonald helped the Lady Wolves gain an early 8-4 advantage in the first set. The hard hitting of Garfield, Trinniti Garrett and Kylie Rodenberg led the way to a 13-8 lead.

The Wildcats battled back and tied the game at 18-18 on a kill by Maâ€™Lea Moore, but blocks by Garrett and Sierra Hamilton put Wolf Point back ahead, 22-20. Wolf Point scored the setâ€™s final point on an ace by Azalei Ackerman.

Kills by Hamilton and aces by MacDonald led the Wolves to a 17-14 lead in the second set. An ace by Jerzey Azure increased the gap to 18-14. The net play of Rodenberg put Wolf Point up by a 21-17 margin.

With the score at 23-17, the Wolves closed out the set on a tip by Hamilton and a kill by MacDonald.

The Lady Wolves trailed by a 16-15 margin in the third set until they struck for four straight points on an ace by Garfield, two spikes by Rodenberg and a tip by Garrett.

Hamilton and Kaleah Miller- Toves accounted for kills to increase the margin to 23-20.

The net play of Mylah Rider pulled Harlem to 23-22, but the Lady Wolves ended the match on a kill by Hamilton and a spike by Garfield.

Leading the Lady Wolves with seven kills each were Hamilton and Garfield. Mac-Donald finished with four aces and five kills. 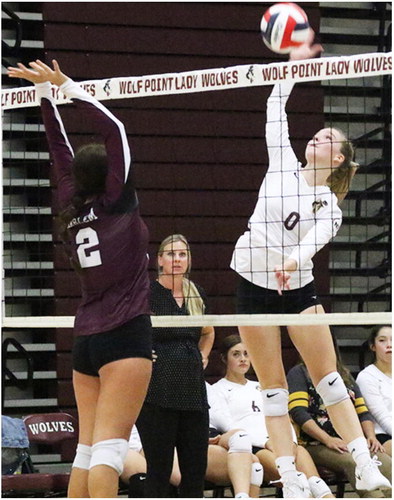 RodenbergWolf Pointâ€™s Kylie Rodenberg leaps to make a kill against the Harlem Wildcats. The Lady Wolves will compete ata tournament in Scobey on Saturday, Sept. 10.(Photo by Bill Vander Weele)