The Lions faced Savage, Culbertson and Scobey during pool play action on Saturday morning. The Lions improved in each meet.

Kills by Alexa Reddig pulled the Lions to 19-5. A block by Aubri Holzrichter was a highlight for Lustre down the stretch.

Culbertson downed Lustre by a 25-16 final. The Lions kept the match close early on a block by Grace Brown and a kill by Reddig.

After Culbertson moved ahead 20-10 on the strong serving of Makena Hauge and Jazzmin Fugere, Lustre cut the margin to 20-12 on an ace by Holzrichter. Sarah Dahl served an ace for a 22-14 margin, but Culbertson won by the 25-16 margin.

Scobey scored the last six points of the match.

The Lions gained a 3-0 lead in the second game against Froid/Lake, but the Red Hawks went out to a 15-8 advantage.

A block by Reddig was a highlight as the Lions pulled to 15-13, but Froid/Lake then accounted for 10 of the last 11 points. 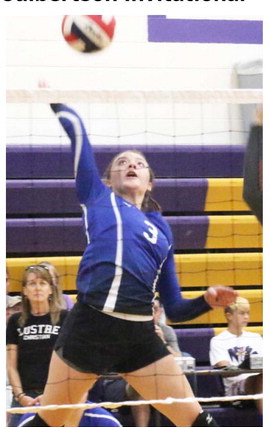 ReddigLustreâ€™s Alexa Reddig goes up for a spike during action in Culbertson on Saturday, Aug. 27.(Photo by Bill Vander Weele)