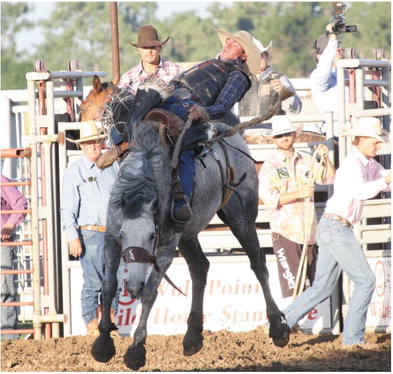 Poplar’s J.C. Crowley had a time of 10.2 for top honors for the first go in tie down roping. Joe Schmidt of Belfield, N.D., placed second at 10.4, Shay Keller of Rockglen, Sask., took third at 10.5 and Bodie Mattison of Sturgis, S.D., placed fourth at 11.3 seconds. Trey Young of Dupree, S.D., took first in the second go in tie down roping with a time of 9.2. Shay Keller of Rockglen, Sask., placed second at 9.9, Lee Sivertsen of Ree Heights, S.D., placed third at 10.0 and Blake Eggl of Minot, N.D. took fourth at 10.3. Keller was the overall tie down roping winner at 20.4, Jess Woodward of Dupree, S.D., earned second at 22.0, Scot Meeks of Airdrie, Alberta, took third at 26.1 and J Billingsley of Glasgow placed fourth at 26.2 Caleb Bennett earned first in bareback riding with a score of 85.5. Tristan Hansen of Dillon placed second at 78, Will Norstrom of Helena took third at 75 and Tucker Zingg of Crow Agency placed fourth at 73.

Dustin Jenkins of Williston, N.D., earned top honors in bull riding with a score of 71.

Belgrade’s Caden Camp earned first in the first go for steer wrestling with a time of 3.9. Riley Reiss of Manning, N.D., took second at 4.0, Billy Boldon of Oglala, S.D., took third at 4.7 and Ross Mosher of Augusta placed fourth at 5.0. Eli Lord of Sturgis, S.D., earned first in the second go at 4.3. Cameron Morman of Glen Ullin, N.D., placed second at 4.7, Newt Novich of Twin Bridges took third at 4.9 and Kyle Callaway of Blue Creek took fourth at 5.0.

Lord was the overall winner for steer wrestling at 10.2. Kyle Whitaker of Chambers, Neb., took second at 10.7, Novich placed third at 11.1 and Luke Gee of Stanford took fourth at 11.6.

Clay Ullery of Valleyview, Alberta, and Matt Zancannella of Aurora, S.D., won the first go in team roping at 6.2. Clint Summers and Ross Ashford along with Travis Stovall and Parker Murnion tied for second at 6.3. Britt Williams of Hammond and Cayden of Arroyo Grande, Calif., earned first in the second go at 5.1. Tying for second at 5.7 were Clay Ullery and Matt Zancanella along with Deion Parker and Ryan Zurcher.

Ullery and Zancannella were the overall winners for team roping at 11.9. Jacob Hickman and Mason Okke placed second at 13.9. Layne Carson and Jess Chase took third at 20.1, and Shayne Bishop and Chris Barthelmess placed fourth at 23.2.

Calby Hanson of Jamestown, N.D. and Cheyanne Gullory tied for first in ladies’ breakaway at 2.7. Jacey Fortier of Billings and Kassie Kautzman of Walcott, N.D. tied for third at 3.0.