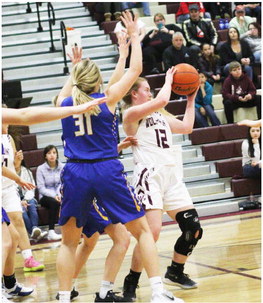 Finishing the regular season schedule fifth place in District 2B, the Lady Wolves and fourth-place Lady Indians will play a loser-out playin game Thursday, Feb. 20, to earn the No. 4 seed at the District 2B tournament in Malta.

The district tournament that will be held Friday and Saturday will advance all four teams to the Northern B Girls’ Divisional in Shelby Thursday through Saturday, March 5-7.

Wolf Point wrapped up the regular season schedule with a 71-40 conference loss to the Lady Scotties in Glasgow Thursday, Feb. 13, and a non-conference 59-31 loss to Scobey in the Wolves’ Den Saturday, Feb. 15.

Poplar lost the schedule finale 73-33 to Harlem. No stats were available.

“Mya was sick. It was senior night and she wanted to go out for a few minutes,” head coach Brent Nygard said.

He responded to a question about the play-in game with Poplar.

“Poplar can shoot the ball. They can get that three-ball,” Nygard said.

He called the postseason a new season.

“The new season starts and some teams are peaking and some have peaked,” Bighorn said.

“The play-in game should be a good one. We split the season with each winning on their home court. It looks like it’s going to come down to who takes care of the ball and who can put the ball through the rim more than the other team,” he said.