Area Sports Fans Had Plenty To Cheer About During 2022 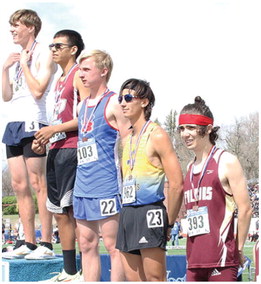 Area fans enjoy many sports highlights in the Wolf Point and Poplar areas during the 2022 year. Among the highlights by month were the following: January

Poplar’s girls captured the first-place wrestling title at the Cut Bank Invitational. Leading the way were Jazmin Gorder with a first and Angelina Escarcega with a second.

Wolf Point’s boys fought off Poplar, 52-41, during league basketball action. Top scorers for the Wolves were Kelby Bauer with 28 and Corey Martell with 13 points. Leading the Indians were Dennis Red Eagle with 14 and Joe Bear with 13 points.

Lustre won both the boys’ and girls’ games against Nashua. Lustre’s boys posted a 51-16 win while Lustre’s girls downed Nashua by a 3726 margin.

The Lustre Lions downed defending state champion Scobey, 54-45, in boys’ basketball action. Top scorers for the Lions were Jasiah Hambira with 15, Klatt with 11, Kolden Hoversland with 11 and Kaleb Hoversland with 10.

Poplar qualified six wrestlers for the state meet. Placing third were Jacob Berger at 285 pounds and Jase Frederick at 120 pounds.

Wolf Point’s Mason Garfield took second place at the Class B state wrestling meet. He finished the season with a 35-8 record.

Poplar’s Angelina Escarcega and Jazmin Gorder earned state championshps at the girls’ all-class state wrestling meet. Precious Keiser took fifth place. The Indians placed fifth at the team with 88 points. The four teams ahead of them were Class AA schools.

Wolf Point’s girls’ basketball team placed second at the District 2B tournament held in Glasgow. The Wolves came from behind to beat Glasgow, 50-45, and then lost to Malta in the championship game.

Poplar’s boys’ basketball team earned a divisional berth by taking third at the district tournament. The Indians surprised Glasgow twice in the tournament.

Wolf Point’s boys’ basketball team lost a controversial heartbreaking 54-53 game against Glasgow to end the season at the district tournament. The Scotties made three free throws with less than a second left to gain the victory.

The Lustre Lions took second place at the District 3C boys’ basketball tourney as they lost to Scobey, 34-33, in the title contest.

Poplar’s boys’ basketball team was outscored by Rocky Rocky, 74-48, in the first round of the divisional tournament. The Indians bounced back with a 77-45 win over Conrad before losing to a strong Shelby team.

The Lustre Lions came a victory away from qualifying for the state tournament when they placed third at the divisional tourney. After beating Bainville, 48-42, the Lions dropped a tough 39-38 game against Fairview in a challenge game.

Wolf Point’s girls’ basketball team opened the divisional tournament with a 5842 victory over Conrad, but the Lady Wolves then lost against Harlem and Glasgow.

Wolf Point was represented at the state level in April when the Wolves’ cheerleaders compete at the Great Northern Cheer and Dance Championships in Helena.

Lustre’s Jasiah Hambira earned first place in the triple jump with a school record distance of 44-3 during the meet in Lambert. He also took first in the high jump, 200 and 400 at the event.

The Wolf Point High School cheerleaders came away with top honors from the Great Northern Cheer and Dance Championships held in Helena. “I was pretty confident because they have been working hard on it,” Wolf Point’s advisor Nellie Garfield said. The competition featured squads from Class B schools.

Montana Gov. Greg Gianforte presented Poplar’s Jazmin Gorder with the Spirit of Montana Award during an assembly at the school. Gianforte noted that Gorder has excelled both on the wrestling mat and the classroom. She is a two-time state wrestling champion.

Point, Poplar, Frazer and Lustre Christian all competed at the 37th annual Norm Girard Top 10 meet in Glasgow on Tuesday. Distance runners Peyton Summers and Ethan Blount highlighted Wolf Point’s efforts at the meet. Summers, a sophomore, earned top honors in the 3200-meter run with a time of 10:09.71. He placed second in the 1600 at 4:38.88.

Wolf Point’s boys’ distance runners led the pack during the District 2B track meet held in Glasgow. Between Peyton Summers, Ethan Blount and Kholby Spotted-Wolf, the Wolves accounted for 44 points in the 1600 and 3200 meter runs.

Gaige Bushman of Wolf Point qualified for the Class B state golf meet. He placed 15th at the divisional meet.

The Poplar Indians took fourth place in both the boys’ and girls’ standings during the District 2B track meet held in Glasgow. The Indians captured two first-place honors at the meet. Kaniel Ricker had a mark of 39-0 for top honors in the triple jump. Kameron Reum finished first in the 300-meter hurdles at 45.71 seconds.

An outstanding day by Ryker Ackerman led Frazer to a third-place showing at the District 3C track meet in Glasgow. The Bearcubs accounted for 35 points at the district meet. Ackerman earned first place in the javelin with a best of 120-7, second in the discus with a mark of 101-7 and third in the shot put at 40-01.

Wolf Point’s boys’ track team accounted for 73 points to earn fourth place at the North-East divisional track meet in Great Falls. The Wolves captured the top three spots in both the 1600 and 3200 meter runs. Katelyn MacDonald led the way for Wolf Point’s girls. The junior captured second place in the javelin with a mark of 114-01. She placed third in the shot put with a best of 32-7.

Wolf Point’s Peyton Summers and Mason Garfield each earned All-State medals during the Class B state track meet held in Great Falls. Summers, a sophomore, led most of the way in the 3200 until Red Lodge’s Brandon Emineth moved ahead during the final lap. Emineth, a senior who also won the state cross-country title, finished with a time of 10:00.03. Summers earned second with a time of 10:02.29. Summers accounted for a strong finish to earn fourth place in the 1600 with a personal best time of 4:37.24. Garfield, a senior, claimed fourth place in the discus with a best of 135-11. His best effort came on his second throw in the event.

To Be Continued Next Issue