Cowboys’ Season Ends In Semi-final Round Against Belt 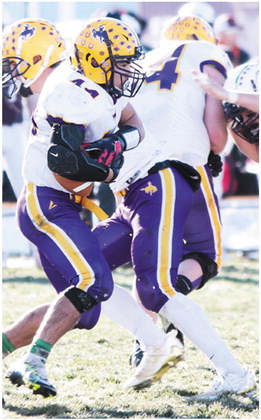 Culbertson’s outstanding football season experienced a tough ending when the Cowboys lost at Belt, 38-0, in the semi-final round of the state eight-man playoffs on Saturday, Nov. 12.

The Cowboys accounted for a couple of scoring opportunities in the first half, but they were unable to reach the end zone.

Culbertson opened the contest by driving from its own 20 to inside the Belt 30. A 13-yard pass from Bridger Salvevold to Mark Kirkaldie produced the game’s initial first down at the 34. The running attack featuring Kobe Nickoloff, Justice Bengochea and Salvevold then marched the ball into Belt territory. A quarterback sneak by Salvevold resulted in a first down at the 23.

The Cowboys, however, were then stopped and forced to punt the ball. Peyton Perkins delivered a great punt that was downed at the one by Micah Eagleboy.

On third down, Belt reached the end zone on a 75yard bubble screen play.

The Huskies ran in the two-point conversion for an 8-0 lead.

Belt’s second score came on a 48-yard drive. A run from the one and a conversion dash put the Huskies up 16-0 with 41 seconds left in the opening quarter.

The Cowboys responded by using their rushing attack to drive inside Belt territory. A pass from Salvevold to Perkins picked up a first down at the Belt 32. The threat ended with a punt.

Belt drove deep inside Culbertson territory again, but Reece Moon intercepted a pass in the end zone to give momentum to the Cowboys.

The Huskies increased their advantage to 22-0 on a 42-yard interception return with 1:14 left in the half.

Culbertson’s sophomore quarterback Salvevold, who was slowed with a knee injury, suffered another injury late in the half and didn’t return to action.

Belt added touchdowns on its first two possessions of the third quarter. A 64-yard run and a 26-yard pass put the margin at 38-0.