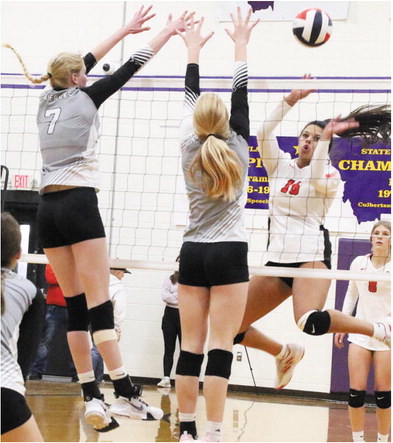 Down two sets to one, Froid/Lake trailed 8-5 in the fourth set until two tips and a block by Baylee Davidson produced a 9-8 lead.

A kill by Mara Salvevold and three kills by Carolyne Christoffersen put the Red Hawks ahead by a 13-9 margin.

After the net play of Grace Gackle cut the margin to 1513, Froid/Lake scored on a block by Christoffersen and an ace by Salvevold.

Circle’s Madeline Black served an ace for a 20-18 game, but the Red Hawks answered with kills by Dasani Nesbit, Jaeleigh Davidson and Christoffersen for a 2320 advantage. Another kill by Christoffersen ended the fourth set at 25-20.

In the fifth and deciding set, two blocks by Christoffersen put the Red Hawks ahead 5-2. A kill by Nesbit helped Froid/ Lake gain an 8-2 lead.

Froid/Lake went ahead 11-6 on good net plays by Nesbit and B. Davidson. The Wildcats, however, battled back to 11-10 on kills by Madeline Moline and Alexis Moline.

Froid/Lake moved back ahead on kills by Salvevold and Christoffersen, but Circle tallied the last three points of the match.