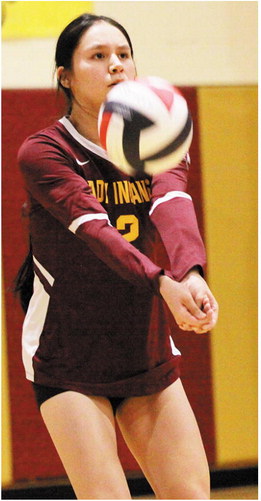 The Poplar Indians put up a good fight but lost against Shelby in loser-out play at the Northern B divisional volleyball tournament in Choteau on Friday, Nov. 4.

The Poplar Indians lost to powerhouse Choteau in the first round of the Northern B divisional volleyball tournament in Choteau on Thursday, Nov. 3.

Leading Poplar’s attack were Kesse Erickson and Braelyn Nordwick with four kills each.

Serving two aces each were EmmaRae Martell and Morgen Nordwick. B. Nordwick had two blocks.

Leaders in assists were E. Martell with seven and Morgan Russell with four. M. Nordwick finished with 13 digs.