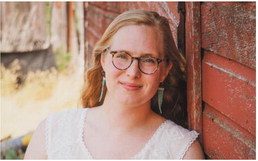 Dagmar’s Megan Torgerson recently launched the third season of Reframing Rural, an original podcast series created with the aim of “bridging the urban and rural divide.”

According to Torgerson, the latest season of the podcast will “transport listeners to Golden Triangle wheat fields, farmhouse kitchen tables and small mountain town main streets.” The first installment of the season includes an interview with writer Sarah Vogel, author of The Farmer’s Lawyer ( Bloomsbury, 2021).

The series combines narrative nonfiction based episodes with in-depth interviews. Season three will shine light on the state of the family farm, the resurgence of regenerative techniques in agriculture and the realities of rural gentrification. The show is available on Apple Podcasts, Spotify, Butte America Radio, Gallatin Valley Radio and anywhere podcasts are available.

Torgerson earned an MFA in arts leadership from Seattle University and a BA in English with a creative nonfiction emphasis from the University of Montana. Following a position working for Emmy award-winning documentary filmmaker, Ian McCluskey in Portland, Ore., she moved to Asheville, N.C., where she worked with environmental nonprofits and outdoor brands at the boutique PR firm, Darby Communications. In 2018, Torgerson moved to Seattle, Wash., where she earned her MFA and launched Reframing Rural, which was awarded the 2020 Remote Scholar in Residence award and a fellowship from Guest House Cultural Capital Residency.

Her project has received a lot of support, including a public humanities fellowship from Humanities Washington in the amount of $8,500, a grant from Humanities Montana for the production of the first two episodes and general operating support from Headwaters Foundation, based out of Missoula.

This fall, Torgerson was featured in University of Montana’s annual alumni print magazine, the Montanan.