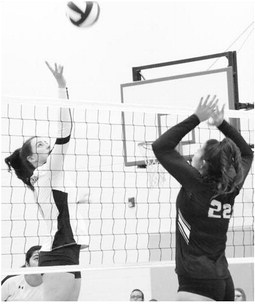 The Culbertson Cowgirls placed sixth at the District 1C volleyball tournament and came just one victory away from qualifying for the divisional tournament.

Culbertson trailed by a 2219 margin in the fourth set but displayed great character in coming back. Kills by Makena Hauge, Jazzmin Fugere and Destiny Thompson put the Cowgirls up by a 24-23 margin.

With the score even at 27-27, the Cowgirls won the fourth set on a block by Thompson and a tip by Alicyn Ator to force a fifth set.

A kill by Perla Burciaga helped Culbertson cut the gap to 13-12, but Fairview struck for the last two points.

Leaders in digs were Hauge with 32, Fugere with 27, Thompson with 23, Burciaga with 22, Ayden Ator with 16, Alicyn Ator with 12 and Leandra Perkins with four.

Hauge finished the match with 28 kills.

Also with kills were Thompson with seven, Burciaga with five and Perkins with one. Hauge had eight blocks. Thompson added a block.

Serving aces were Burciaga with four, Thompson with three, Fugere with three, Alicyn Ator with three, Perkins with two and Hauge with one.