Cowboys March On With Playoff Win Over Lone Peak 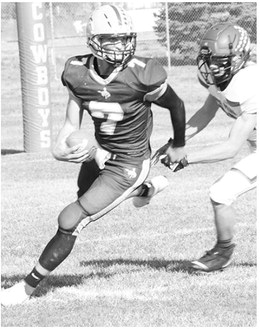 The Culbertson Cowboys earned a first-round playoff win over Lone Peak, 64-16, with a dominating second-half performance at home on Saturday, Oct. 29.

A touchdown late in the first half pulled the visiting Bighorns to 34-16 at intermission, but the Cowboys ran for three third-quarter touchdowns on their way to an impressive victory.

“We kept running the ball and worn them down,” Culbertson Coach Brian Manning said. “The kids were definitely excited about this game. They performed well and kept going.”

Culbertson’s first two touchdowns of the second half came on identical 40yard touchdown runs around the left end by senior Kobe Nickoloff.

“They started to overload the inside,” Manning explained. “It was good running by Kobe.”

“It was a team effort on the defensive front,” Manning said.

After Nickoloff’s second touchdown run in the third quarter put the Cowboys up 50-16 with 8:43 left in the period, the Cowboys were soon in business again when Moon intercepted a pass at the 39. A 12-yard smash by Justice Bengochea earned Culbertson a first down at the Lone Peak 21.

Nickoloff then broke loose on an 18-yard dash to the three. Two plays later, Nickoloff scored from the one for a 56-16 advantage with 6:01 left in the third quarter.

Lone Peak was stopped on its next possession as Mark Kirkaldie registered a sack.

Culbertson’s final touchdown of the day came on a 20-yard run by Carson Solem with 10:34 remaining. Peyton Perkins ran in the conversion for a 64-16 margin.

The Cowboys’ rushing attack dominated the contest as Nickoloff finished with 192 yards while quarterback Bridger Salvevold gained 161 yards on the ground.

The Cowboys drove 65 yards on their first possession of the playoff battle. The running combination of Salvevold, Nickoloff and Bengochea advanced the ball to the Lone Peak 10 for a first down. From there, Salvevold scored with 7:16 left in the first quarter.

Lone Peak answered with a 37-yard touchdown pass from Julek Shipman to Pierce Farr with 6:05 left in the quarter. Shipman ran in the two-point conversion to put the Bighorns ahead 8-6. Culbertson responded with a 65-yard scoring drive to go ahead to stay with keeper runs by Salvevold highlighting the possession. Nickoloff reached the end zone with a six-yard run with 47 seconds left in the period.

Strong defensive plays by Perkins and Bengochea stopped Lone Peak on its next possession. The Cowboys cashed in when Salvevold scored from the one for an 18-8 lead with 7:05 left in the half.

Salvevold, a sophomore, then reversed fields on a 60yard touchdown run with 4:37 left in the half. Salvevold got in for the conversion for a 26-8 advantage.

On Lone Peak’s next possession, Moon intercepted a pass at the 32 and raced down to the nine. From there, Nickoloff scored with 3:40 left in the half. Salvevold passed to Kirkaldie for the conversion and a 34-8 advantage.

The Bighorns ended the half with a 39-yard scoring drive. Shipman passed to George Helms on a threeyard touchdown pass with 36 seconds remaining in the half. Shipman hit Ebe Grabow for the conversion to cut the margin to 34-16.

Culbertson will host Superior for a second-round playoff game at 1 p.m. on Saturday, Nov. 5.