The Wolf Point football team put together a good effort but lost its season finale in Glasgow, 68-13, on Friday, Oct. 21.

The Scotties gained great field possession early when a bad snap on Wolf Point’s punt attempt resulted in a tackle by Morgan Fast at the Wolf Point seven. Glasgow scored on a seven-yard run by Tatum Hansen with 9:41 left in the quarter. After the Wolves came up short on a fourthdown attempt, Glasgow’s second touchdown came on a 40-yard dash by Hansen with 3:31 left in the period. Jack Cornwell scored his second conversion of the night for a 16-0 margin.

Wolf Point responded with a 65-yard scoring drive. Passes from Juliun Benson to Gaige Bushman and Preston Swenson produced a first down at the 49. On second down at the Glasgow 47, the Wolves scored on a pass play from Benson to Bushman with 1:01 remaining in the opening quarter.

Glasgow increased its lead to 24-6 early in the second quarter on a 34-yard completion from Mason Donaldson to Ashton Potter.

After a 57-yard punt return by Potter put the Scotties at the Wolf Point five, the Wolves’ defense kept Glasgow out of the end zone for the first three downs on tackles by Michael Bell and Swenson along with a pass defended by Swenson. On fourth down from the four, Glasgow’s Hansen reached the end zone with 10:07 left in the half.

The Scotties gained possession again on an interception by Potter. Glasgow’s Cornwell scored on a 16-yard run for a touchdown. A conversion run by Toryn Richards increased the gap to 38-6.

The Wolves had a scoring opportunity when Swenson recovered a fumbled punt return at the Glasgow 37. Runs by Maddox Reum and Benson earned Wolf Point a first down at the 24. A 15-yard quarterback keeper gain by Benson was good for another first down at the nine. The threat, however, ended with a fumble recovered by Wyatt Babb.

Glasgow’s final touchdown of the half came on a twoyard gain by Richards. Donaldson passed to Babb for the conversion and a 46-6 margin.

The Scotties scored on their second play from scrimmage in the second half when Donaldson connected with Hansen on a 62-yard throw. A 20-yard pass from Khye Gamas to Babb put the score at 60-6 to end the third quarter.

The Wolves used nice passes to Bushman and Swenson on a 78-yard scoring drive in the fourth quarter.

After Benson ran for first downs to the 29 and four, Reum scored with 5:45 left in the game. Swenson kicked the conversion for a 60-13 score.

A nine-yard run by Mason Hunter accounted for Glasgow’s final touchdown with 4:12 remaining.

Wolf Point had a good night passing the ball as Benson threw for 143 yards. Swenson caught seven passes for 98 total yards and Bushman had four receptions for 81 total yards.

Leading Glasgow’s rushing attack were Hansen with 104 yards and Richards with 91 yards.

The Wolves finished the season with an overall record of 2-6 and a league mark of 0-5. 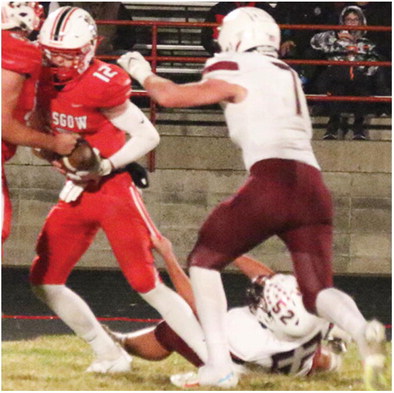