The Culbertson Cowboys ended their regular football season on a high note as they crushed MonDak, 52-8, for senior night on Saturday, Oct. 15. The Cowboys will begin playoff action at home on Saturday, Oct. 29.

The Cowboys, wearing throwback uniforms from 2004 and starting a senior line-up, drove 60 yards on their first possession of the game behind the running of Kobe Nickoloff and Payton Perkins. After a scramble by Perkins was good for a 13yard gain and a first down at the MonDak 21, the Cowboys earned another first down on a six-yard smash by fullback Justice Bengochea to the eight.

On second down at the one, Bengochea scored with 5:36 left in the opening quarter.

An interception by senior Hugh Donaldson gave the Cowboys the ball at the Mon-Dak 20. Bengochea broke loose on an 11-yard touchdown run for a 12-0 lead with 3:39 left in the period.

Culbertson’s defense, led with plays by Colin Avance and Bengochea, forced the Thunder into a punt. A nice return by Reese Moon set up the offense at the MonDak 32, but the Thunder received a big play from Graham Wright when he intercepted a pass at the 14 and raced all the way to the Culbertson one before being tackled by Bridger Salvevold.

The Thunder were kept out of the end zone on the first two downs on strong tackles by Bengochea and Carson Solem. Two incompletions forced the Thunder to come away empty handed.

On first down at the two, Nickoloff broke away for a 78-yard touchdown run with 11:41 left in the half. Josue Mena kicked the conversion for a 19-0 advantage.

On Culbertson’s next possession, Nickoloff scored on a 48-yard dash to increase the margin to 25-0 with 11:03 remaining in the half.

MonDak drove inside Culbertson’s territory on its next drive, but a hard hit by Bengochea forced a fumble and Donaldson made the recovery. A 60-yard drive by the Cowboys finished with a four-yard touchdown run by Nickoloff with 4:31 left in the half.

The Cowboys reached scoring position again when Nickoloff leaped and outwrestled a defender for a pass completion at the two. Bengochea then scored with 17 seconds left in the half. Salvevold passed to Nickoloff for the conversion and a 39-0 lead.

The Cowboys opened the second half with a 59-yard drive. A 38-yard pass play from Salvevold to Bengochea produced a first down at the MonDak 21. Culbertson went on to score on a two-yard sneak by Salvevold. Jesus Guzman kicked the conversion for a 46-0 lead.

After an interception by Moon, the Cowboys reached the end zone on a 26-yard run by Solem for a 52-0 advantage with 42 seconds left in the third quarter.

The Thunder scored on an 18-yard pass from Wright to Adam Paine with 3:53 remaining in the game. Wright passed to Thomas Arnson for the two-point conversion.

Culbertson’s quarterback Bridger Salvevold takes off for a big gain. 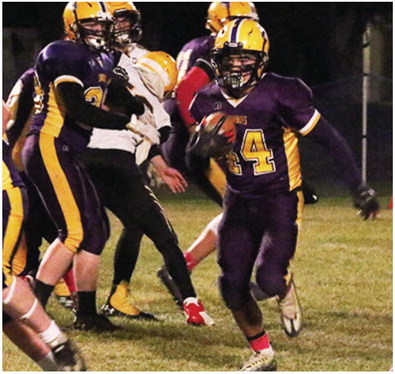