In the conference opening game for both squads, Froid/ Lake jumped out to a big early lead and defeated Bainville, 54-25, in Medicine Lake on Saturday, Sept. 24.

Froid/Lakeâ€™s Coach Michael Reiter was pleased with his teamâ€™s improved intensity in the contest.

After a third-down tackle by Nate Stentoft ended Bainvilleâ€™s first possession, the Red Hawks started on the Bainville 20 due to a short punt. Austen Hobbs raced to the eight on first down. The senior then scored on the next play. Mason Dethman kicked the conversion for an 8-0 lead with 8:11 left in the opening quarter.

On the Bulldogsâ€™ next possession, Aidan Hernandez forced a fumble that was recovered by Stentoft. Hobbs broke loose for a 31-yard touchdown dash. Dethmanâ€™s kick put the margin at 16-0.

A sack by Max Engelke helped stop Bainvilleâ€™s next drive. The Red Hawks then reached the end zone on a 21yard run by Stentoft with 3:26 left in the first quarter.

A nice pass play from Cayden Boyd to Alex Strickland produced a first down for the Bulldogs at the 34. A holding call stalled Bainvilleâ€™s drive. The Red Hawks then put together a 47-yard drive highlighted by the running of Hobbs and Stentoft. Hobbs scored from the three with 7:01 left in the half. Dethmanâ€™s fourth kick was good for a 32-0 advantage.

The Bulldogs got into scoring position when Boyd connected with Strickland on a 49 yard pass play to the Froid/ Lake 16. Bainville scored on a four-yard throw from Boyd to Charles Butikofer with 5:56 remaining in the half.

Froid/Lake struck back with a 29-yard touchdown run by Stentoft for a 38-6 advantage. The Red Hawks scored again when Dethman ran in from the one with 19 seconds left in the half. Dethmanâ€™s kick put the margin at 46-6.

Daniel Forizs opened the second half with a 69-yard kickoff return for a touchdown. Dethmanâ€™s kick was good for a 54-6 advantage.

The Bulldogs got their offensive attack going in the fourth quarter as an 11-yard pass from Rowen Wilson to Strickland was good for a touchdown with 8:23 remaining.

After Bainville got the ball on the Froid/Lake one on a bad snap in punt formation, Bainville scored on a pass from Samuel Butikofer to Reed Winn. Wilson passed to Strickland for the conversion to cut the gap to 54-19.

The Bulldogs added a touchdown when Wilson connected with Strickland on a 33-yard pass with eight seconds remaining. Froid/Lake will travel to Savage on Saturday, Oct. 1.

Bainville will host Richey/ Lambert for its homecoming game on Saturday, Oct. 1. 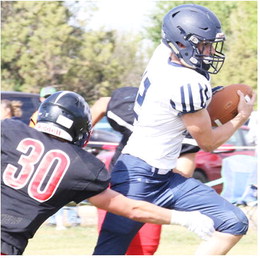 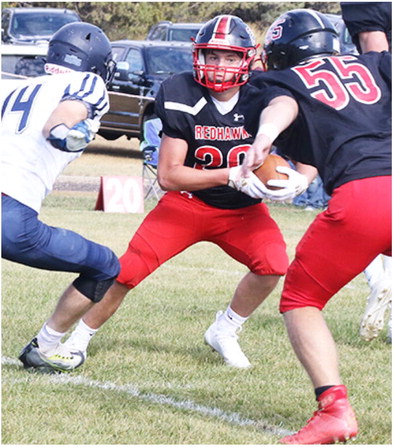 StentoftNate Stentoft uses a block by Cian Logan to run for yards during the victory overBainville on Saturday, Sept. 24.(Photo by Bill Vander Weele)