The Culbertson Cowboys got the fireworks out for their homecoming game against Circle on Friday, Sept. 23, as their explosive offensive attack led the way in a 64-34 league victory.

Each squad scored a touchdown in the first quarter. Culbertson reached the end zone on a 50-yard quarterback keeper run by Bridger Salvevold while Circle scored when Jaron Taylor battled in from the one on a fourthdown play. The Cowboys gained the upper-hand with a 54-yard scoring drive early in the second quarter. A 31-yard pass from Salvevold to Payton Perkins kept the possession alive at the Circle 30. The running of Kobe Nickoloff and Salvevold moved the ball down to the 15 for another first down. Culbertson went on to score on a six-yard dash by Nickoloff with 9:39 left in the half. Salvevold ran in the two-point conversion for a 14-6 lead.

After strong defensive plays by Mark Kirkaldie and Nickoloff ended Circleâ€™s next threat, the Cowboys gained a 20-6 advantage on a 37-yard dash by Salvevold with 6:35 left in the half.

The Wildcats, however, ended the half on a high note when the accurate passing of Beau Beery took Circle deep into Culbertson territory. Beery ran in from the three with 21 seconds left in the half to pull the Wildcats to 20-12.

The Wildcats then received the first break of the third quarter when Taylor recovered a fumble near midfield.

Circle marched inside the Culbertson 20 before Perkins made one of the plays of the game for the Cowboys when he grabbed the ball away from a ballcarrier and raced 67 yards for a defensive touchdown. Nickoloff ran in the conversion for a 28-12 lead with 7:02 left in the period. Circle responded with a 39-yard touchdown strike from Beery to Donovan Gibbs. Taylor fought in for the conversion to cut the margin to 28-20.

It took the Cowboys only four plays to counter with another touchdown as Salvevold connected with Perkins on a 24-yard pass with 4:18 still remaining in the third quarter.

Circle didnâ€™t go away as passes from Beery to Taylor and Gibbs moved the ball to the Cowboysâ€™ two. Taylor scored the touchdown and conversion for a 34-28 game.

Justice Bengochea then got involved in the scoring when the fullbackâ€™s powerful running covered 53 yards for a touchdown for a 40-28 advantage.

The Wildcats opened the fourth quarterâ€™s scoring on a four-yard pass from Beery to Gibbs to close the gap to 4034 with 10:35 remaining.

Culbertson responded with another scoring drive of its own. A 33-yard completion from Salvevold to Bengochea earned a first down at the Circle 31. The Cowboys went on to score on a three-yard run by Salvevold. Nickoloffâ€™s conversion run was good for a 48-34 lead with 8:49 left.

Culbertsonâ€™s defense, highlighted by a fourth-down breakup by Reese Moon, stopped Circle on its next possession. On second down from the 38, Perkins broke away for a 42-yard touchdown run. The senior also got in for the conversion to put the gap at 56-34.

The Cowboysâ€™ defense, led by plays from Kirkaldie, Colin Avance and Hugh Donaldson, stopped Circle again on its next two drives. After Donaldson forced a fumble, Avance returned the ball down to the two. From there, Salvevold scored. Perkins ran in the conversion for a 64-34 margin with 2:32 left.

The Cowboys will travel to Plentywood on Friday, Sept. 30. 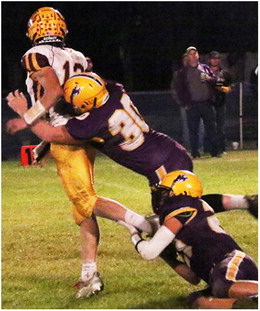