The Wolf Point football team tuned up for the regular season with the maroon and white scrimmage on Thursday, Aug. 25.

â€śI was pleased with the overall effort and how they came out to play,â€ť Wolf Point coach Anthony Red Cloud said after the scrimmage.

He noted there were many good plays both offensively and defensively.

The Wolves will open their season at Baker on Friday, Sept. 2.

â€śWe will work on fundamentals this week and getting our alignments done,â€ť Red Cloud said.

Baker defeated the Wolves by a 40-6 final last season. Baker suffered a 35-0 loss against Jefferson to start this season.

The first offensive highlight during the scrimmage came on a 28-yard pass from Juliun Benson to Kraven Silk. The White team responded with a six-yard touchdown run by Corey Martell.

Maroonâ€™s next score happened on a 40-yard dash by Maddox Reum. The White squad struck on a long pass play from Preston Swenson to Gaige Bushman. Maroon responded with a 12-yard touchdown throw from Benson to Kelby Bauer.

The White team reached the end zone on a 40-yard pass play from Bushman to Logan Brown. White then added another touchdown on a 29-yard pass from Swenson to Martell. 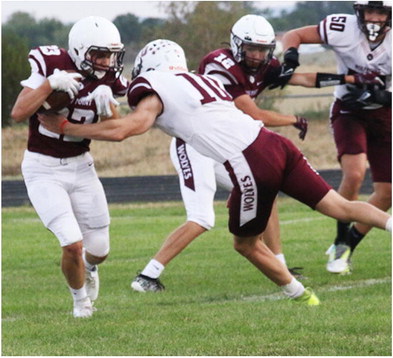 ScrimmageMaddox Reum tries to avoid a tackle by Corey Martell during the scrimmage onThursday, Aug. 25.(Photo by Bill Vander Weele)