The Wolf Point boys got off to a solid start to the cross country season at their home invitational held at the Wolf Point Airport Golf Course on Friday, Aug. 26.

â€śItâ€™s better than last year by about half a minute,â€ť Summers said after the meet.

He noted that the time was a great starting point to his season.

â€śBeing in the 17s to start is pretty good,â€ť Summers said.

Wolf Pointâ€™s senior Kelby Bauer finished in fifth place with a time of 20:14.22.

â€śIt was alright,â€ť Bauer said. He explained he had a good start, fell behind but then made a solid recovery.

Bauer is also playing football this fall and competed in a scrimmage on Thursday night.

â€śI was excited for both. I was ready,â€ť Bauer said.

The Indians placed second in the team standings with 48 points. Williston Trinity topped the field with 42 points. Also in the top five were Plentywood at 67, Culbertson at 80 and Scobey at 98.

Teams will head to Poplar for the Poplar Invitational on Saturday, Sept. 3.

The StartPoplarâ€™s runners take off to begin the Wolf Point Invitational on Friday, Aug. 26. Poplar will host a meet onSaturday, Sept. 3.(Photo by Bill Vander Weele) 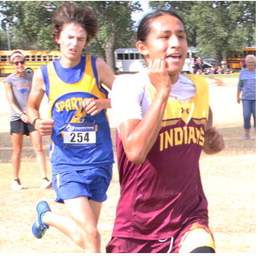