Volleyball squads from Culbertson, Froid/Lake and Bainville each accounted for highlights during the Culbertson Invitational on Saturday, Aug. 27.

During pool play, the Culbertson Cowgirls were undefeated with victories over Savage, Lustre Christian and Scobey.

The Cowgirls opened play with a 25-17 win over Savage. Ahead by a 22-17 margin, Culbertson struck for the final three points on two kills by Makena Hauge and an ace by Alicyn Ator.

Culbertson Coach Tiffany Nielsen said she was pleased that the Cowgirls were able to bounce back from a midgame slump to finish strong against Savage.

Culbertson downed Scobey by a 25-17 final. The Cowgirls gained a 19-13 lead as the net play of Destiny Thompson along with the serving of Hauge and Jazzmin Fugere highlighted play.

Kills by Hauge down the stretch led to the 25-17 victory.

The Cowgirls then defeated Lustre by a 25-16 final. Aces by Fugere and Hauge helped Culbertson earn a 20-9 advantage.

In tournament play, the Cowgirls opened with a 25-8, 25-8, win over Brockton. Serves by Ator and kills by Hauge led Culbertson to a 19-4 lead in the first set. The net play of Perla Burciaga and Hauge put Culbertson ahead by a 22-5 margin in the second game.

Culbertson then fell to Scobey in a three-set match in the semi-final round.

Froid/Lake took top honors in their pool with wins over Bainville, Nashua and Brockton.

The Red Hawks downed Bainville by a 25-13 score to open the day. A pair of kills by Dasani Nesbit led Froid/ Lake to an 8-1 lead. Kills by Mara Salvevold increased the margin to 17-9.

Kills by Carolyne Christoffersen and Nesbit led the Red Hawks down the stretch.

Froid/Lake knocked off Brockton by a 25-8 margin. Strong serves by Aleah Johnson led the Red Hawks near the end of the match against Brockton.

After a kill by Salvevold ended the first set, the Red Hawks used the strong net play of Nesbit and Christoffersen to take a 7-5 lead in the second set.

Two straight aces by Jaeleigh Davidson put the Red Hawks up 22-14 en route to the victory.

Froid/Lake fell in two sets against Savage in the semi-final round.

The Bulldogs posted two victories during pool play at the Culbertson Invitational.

Bainville downed Brockton by a 25-15 victory. Kills by Kaelyn Romo and Elsie Wilson led the way as Bainville took a 14-8 advantage.

A pair of aces by Wilson put the margin at 18-12. Ahead by a 22-15 score, the Bulldogs ended the match with three aces by Addison Hansen.

The Bulldogs were impressive in defeating Nashua, 25-13. The serving of Lila Butikofer led the Bulldogs to a 9-3 lead. The net play of Brecklyn Pippenger and serving of Wilson increased the margin to 15-4.

Kills by B. Pippenger, Hailey Berwick and Miah Pippenger highlighted play for the Bulldogs down the stretch.

The Bulldogs, who opened the season with a home loss against Savage on Friday, Aug. 26, then put up a good fight against Scobey in the first round of tournament play before falling by a 23-25, 15-25, final.

Bainville trailed by a 22-17 margin in the first set but fought back to 22-19 on a kill by Wilson, a serve by Berwick and a kill by Miah Pippenger.

After Scobey moved ahead 23-20, the Bulldogs responded with two aces by Butikofer and a kill by Wilson for a 23-23 deadlock. Scobey, however, scored the last two points. 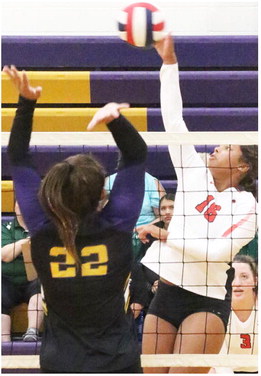 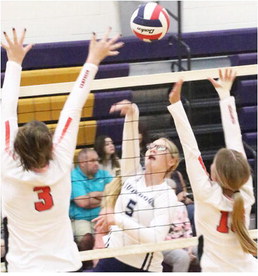 Meeting At the NetBainvilleâ€™s Miah Pippenger hits the ball over against Froid/Lakeâ€™s Carolyne Christoffersen, left, and Addison Elvsaas.(Photo by Bill Vander Weele) 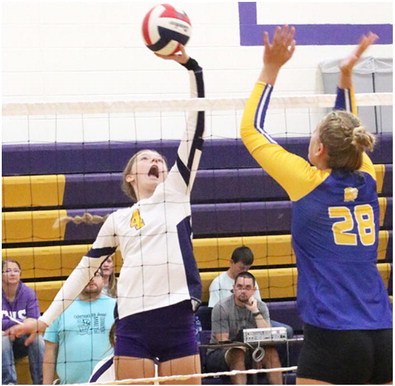 ThompsonCulbertsonâ€™s Destiny Thompson goes up for a tip during a match against Scobey atthe Culbertson Invitational.(Photo by Bill Vander Weele) 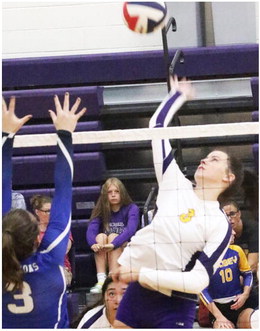