Red Hawks Come Back For 49-48 Victory To Start Season

It was a growing time for the Froid/Lake Red Hawks. Entering the season without a great deal of quality playing time experience, the Red Hawks fell behind 20-0 but showed the character of champions by scoring a 49-48 home victory over Custer/ Hysham/Melstone on Saturday, Aug. 28.

The Red Hawks were able to grab a 42-40 advantage when Mason Dethman connected with Landen Kelm on a 31-yard touchdown pass with three minutes remaining in the six-man shootout.

That lead, however, didn’t last long. The Rebels’ senior standout Bryce Grebe broke loose for a 59-yard run to the Froid-Lake six. On the next play, Alex Russell passed to Jake Sniverly for a touchdown with two minutes left. The conversion kick by Grebe gave the Rebels a 48-42 lead.

Facing the prospect of their first loss in two years, the Red Hawks started their next possession at their own 27 with the clicking clock a factor. Dethman, a junior, battled for 19 yards on first down to the Rebels’ 34.

Dethman then hit Austen Hobbs with a short, swing pass and the senior running back went the distance for a touchdown with 1:11 on the clock.

With the score deadlocked at 48-48, the Red Hawks’ coaching staff decided to run for a conversion point. Dethman fought his way into the end zone to put Froid/Lake in the lead.

The Red Hawks’ defense then made sure that the one-point margin was good enough. On second down, Grebe was tackled for just a short gain by Hobbs. After Caden Kelm provided good pass coverage for an incompletion on third down, a heavy rush by Max Engelke and Hobbs destroyed the Rebels’ fourth-down attempt with only 10 seconds left.

The season-opening game started poorly for the defending state champions as the Rebels jumped out to a 20-0 advantage.

Froid/Lake finally got on the right track when Daniel Forizs dashed 65 for a touchdown to cut the margin to 20-6 with 1:14 remaining in the half.

The Rebels responded by driving into Froid/Lake territory, but Dethman intercepted a pass and raced 62 yards for a touchdown with four seconds left in the half. Dethman added the conversion kick for a 20-14 game.

The Red Hawks started the second half on a high note when Dethman hit Forizs on a 19-yard touchdown pass. Dethman’s kick put Froid/ Lake up 22-20.

Things even got brighter for the Red Hawks when Nate Stentoft returned an interception 22 yards for a touchdown for a 28-20 advantage.

After an interception by Alex Russell, the Rebels pulled to 28-26 on a two-yard run by Caden Green.

Froid/Lake kept rolling when Dethman hit Hobbs with a long pass. Dethman then scrambled in from the 14 for a 34-26 lead to end the third quarter.

The Rebels, however, accounted for the game’s next two touchdowns on a twoyard run and a 42-yard interception return, both by Grebe, to gain a 40-34 lead with 8:14 remaining.

The Red Hawks came two points closer, 40-35, when a fumbled snap resulted in a safety with four minutes remaining. Aiden Hernandez and C. Kelm applied defensive pressure on that play. A free kick gave the Red Hawks possession on their own 35 as they prepared for a thrilling final minutes to decide the outcome. 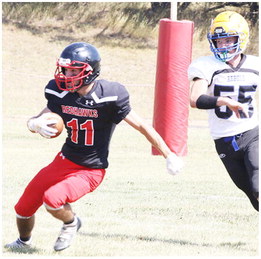