Despite being low on numbers, Poplarâ€™s football team turned in a solid effort in its season-opening 28-12 loss at home against Harlem on Saturday, Aug. 27. Harlem held a 20-6 halftime lead with two of the Wildcatsâ€™ scores coming off fumbles by Poplar. The Indiansâ€™ touchdown in the second quarter came on a pass play from Kameron Reum to Ivan Iron Cloud.

Poplarâ€™s defense came out on a strong note to open the third quarter. Sacks by Aries White Tail Feather and Xander Steele forced Harlem into a fourth-and-28 situation.

A bad snap on the punt gave the Indians possession on the Harlem 34. Poplarâ€™s offense, however, couldnâ€™t cash in on the opportunity.

Runs by Clay Adams put the Wildcats in scoring position. Harlem scored on a 12-yard dash by Adams with 4:13 remaining in the third quarter.

Quarterback Leon Champagne ran in the two-point conversion for a 28-6 margin.

Poplar responded with a 48-yard quarterback keeper run by Kameron Reum to pull to 28-12 with 3:12 left in the third quarter.

The Indians had a chance to get closer when Cameron Spotted Bird recovered a fumble on the Harlem 32 in the fourth quarter.

Poplar faced a fourth-andtwo situation, but the Indians kept the drive alive on a short pass play from Reum to Iron Cloud for a first down at the 20.

Reum then broke away for a 13-yard gain for another first down at the seven. Harlemâ€™s defense kept the Indians out of the end zone midway into the fourth quarter.

A pass interference call put the Indians at the Harlem 34 late in the non-conference contest, but Harlemâ€™s defense held with only 1:16 remaining.

Poplar will host Culbertson in conference action at 7 p.m. on Friday, Sept. 2. 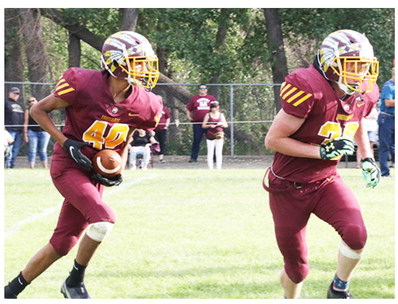 Power PlayPoplarâ€™s Ivan Iron Cloud looks for running room behind the blocking of Gage Berg. The Indians will start conferenceplay at home against Culbertson on Friday, Sept. 2.(Photo by Bill Vander Weele)