Wolf Point‚Äôs volleyball squad will open its season at the Choteau Invitational on Aug. 26-27.

The Wolves have six matches scheduled for Friday including their first action against Broadwater.

Wolf Point will play at least five matches on Saturday.

‚ÄúWe‚Äôre going to be rolling there will a lot of different setups and combinations,‚Äù Wolf Point coach Karli McGowan said.

With a strong core of starters back, the Wolf Point Wolves anticipate being near the top of the District 2B volleyball standings this season.

‚ÄúWe have a lot of upperclassmen on the team,‚Äù McGowan, the team‚Äôs first-year coach, said.

Kylie Rodenberg, a junior, was the squad‚Äôs starting setter last year. Kaleah Miller-Toves, a junior, was a starting outside hitter. Another girl with varsity experience is Azalei Ackerman.

‚ÄúWe‚Äôre going to have a strong front row for sure,‚Äù McGowan said. ‚ÄúDefensively, our front row should be fun to watch.‚Äù

Serving should also be a positive point for the Wolves.

The coach is hopeful a few more girls step up and improve their back-row play.

McGowan played volleyball in high school for the Wolves. ‚ÄúA long time ago,‚Äù she laughed. She also participated in competitive intramurals at MSUBozeman. She has served as an assistant high school coach.

‚ÄúIt‚Äôs exciting, but it‚Äôs a little nerve-racking,‚Äù McGowan said of being the head coach.

‚ÄúMy big push is to have the varsity play to their best and have the younger ones progress,‚Äù McGowan said. 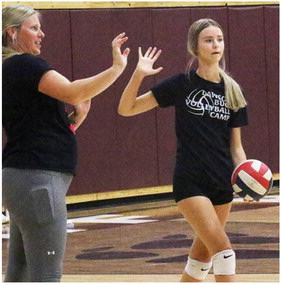 Despite hearing concerns from the public, the Roosevelt County Commissioners approved revising floodplain regulations during its meeting on Tuesday, Nov. 22. During a special public comment meeting regarding the matter, resident Bill Juve noted that if commissioners didn‚Äôt pass the new regulations, that the current regulations would still be in effect. Juve also didn‚Ä...

The Optimist Club‚Äôs annual Angel Tree radiothon will be held this Friday, Dec. 2, from 1 p.m. until 3 p.m. The angel tree is a project that the Optimist Club does every year to help provide gifts to families and children who may not receive any gifts for Christmas. The trees, which can be found around town, have pink and blue angels with child‚Äôs age, gender, cloth...

U.S. Sen. Jon Tester, D-Mont., stressed his priority of slowing down fentanyl trafficking during a conference call with Montana media members on Thursday, Nov. 17. The Securing America‚Äôs Borders Against Fentanyl Act would provide $20 million to: Develop new technology to target and detect fentanyl being trafficked into the United States; Enhance targeting of counterf...