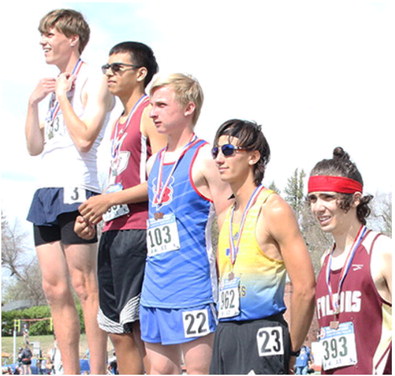 Wolf Point’s Peyton Summers and Mason Garfield each earned All-State medals during the Class B state track meet held in Great Falls on Friday, May 27, and Saturday, May 28.

Summers, a sophomore, led most of the way in the 3200 until Red Lodge’s Brandon Emineth moved ahead during the final lap. Emineth, a senior who also won the state cross-country title, finished with a time of 10:00.03. Summers earned second with a time of 10:02.29.

“I’m proud of having a low 10 minute time in this wind,” Summers said.

Summers accounted for a strong finish to earn fourth place in the 1600 on Saturday with a personal best time of 4:37.24.

“I kind of had to, it’s State,” Summers said of his final kick.

He said taking seventh in the race and just missing being on the podium last season served as motivation this year.

“I didn’t want to do that two years in a row,” Summers said.

Garfield, a senior, claimed fourth place in the discus with a best of 135-11.

His best effort came on his second throw in the event.

“I just felt good,” Garfield said. “My goal was to throw the best I possibly could.’ The Wolves scored 16 points at the meet for 11th place.

Highlight for Poplar included Kaniel Ricker with personal bests of 43-9 in the 300-meter hurdles and 39-6 in the triple jump.