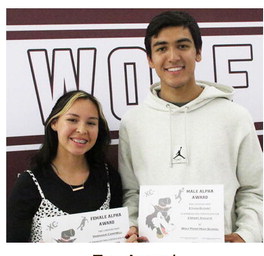 Wolf Point High School’s student athletes were honored during the school’s sports banquet on Tuesday, May 24.

Athletic director Eric Peterson noted this was the first time in a few years because of COVID that the school held the event for all sports.

Cheer coach Nellie Garfield said that the program accomplished “amazing things” this year including earning first at the Great Northern Cheer and Dance Championships. With a young squad, Garfield is excited and “looking to make it even better.”

Award winners for football included Corey Martell as most valuable teammate, Charles Page as most inspirational, Lennoxx Lilley for Mr. Hustle, Chance Smith for most improved and Mason Garfield received the team ball. It was announced that Garfield and Ben Boysun will play in the Class B All-Star game this summer.

Selected as award winners for wrestling were Mason Garfield as most valuable and most inspirational, Joli Beston for the Joe Vandall award, Chance Smith for most improved and Jordan Davis for Mr. Hustle.

The speech and drama program had an outstanding year as Daniel Sears and Del Eymard won the state title in humorous theater. Sears was selected the program’s most valuable teammate, Eymard was selected most inspirational and Chase Adams was most improved.

For the girls’ basketball program, award winners included Jaylee Azure as most valuable teammate, Josie Kolstad as most inspirational, Katelyn MacDonald as Miss Hustle and Kylie Rodenberg as most improved.

Selected as award winners for boys’ basketball were Juliun Benson for most valuable teammate, Ethan Blount for most inspirational, Kelby Bauer for most improved and Corey Martell for Mr. Hustle.

For the track season, award winners were Ethan Blount for most valuable teammate, Katelyn MacDonald for most inspirational and Maddox Reum as most improved.

Winning awards for the tennis team were Kaylee Johnson as the most valuable teammate, Claire Kinzie as most inspirational and Hamyanie Campbell as most improved.

Selected as award winners for golf included Gaige Bushman as most valuable golfer, Aiden Prichard as most improved and Ryver Summers as most inspirational.