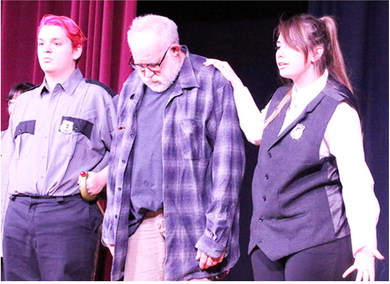 Audience members enjoyed more than a fair share of laughs as Wolf Point High School students entertained with their spring play on Thursday, May 19, and Friday, May 20, in the high school auditorium.

The students performed the comedy mystery Moriarty’s Revenge by Christopher Burruto. The play was co-directed by Tiffani Darby and Jacob Boysun.

With the comical expressions from students Del Eymard and Julianna Garfield providing much laughter, the play attracted decent sized crowds both nights.

Ryver Summers and David Hopson took care of the lights and sound.