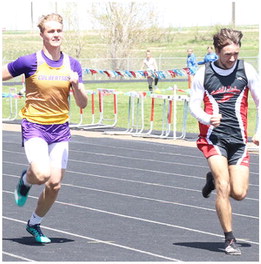 Culbertson, Froid/Lake and Bainville each enjoyed strong efforts during the Eastern C divisional track meet held in Glasgow on Wednesday, May 18.

Culbertson’s boys earned fourth place at the meet with 65 points. The top three teams were Richey/Lambert with 103, Plentywood with 98 and Scobey with 93.

A first-place finish by the 400-meter relay team highlighted the day for the Cowboys. Wyatt Snyder, Reese Moon, Kobe Nickoloff and Bridger Salvevold had a winning time of 47.02 seconds.

Earning third place for the Cowboys were Aiden Perkins with a best of 43-0 in the shot put and Colin Avance with a mark of 126-10 in the discus.

Leading the Cowgirls was the 400-meter relay team with a time of 54.19 seconds for third place. The relay consisted of Destiny Thompson, Makena Hauge, Megan Granbois and Autumn Bergum.

Granbois cleared 4-8 for fifth place in the high jump.

Carolyne Christoffersen had a divisional championship performance for the Froid/Lake Red Hawks. The junior had a mark of 39-4 to earn top honors in the shot put.

Christoffersen placed fifth in the javelin with a mark of 102-9.

Max Engelke enjoyed an outstanding day for Froid/ Lake’s boys as the junior finished second in the 300-meter hurdles at 45.86 seconds and fifth in the 400 at 56.08 seconds.

The high jump was a strong event for the Bainville Bulldogs during the divisional meet.

Scobey’s girls won the team championship with 93 points. Right behind were Saco with 88, Plentywood with 85 and Savage with 73. Fairview and Circle tied for fifth with 45 points.

Other divisional champions in boys’ events included Scobey’s Gage Hallock in the 100 and 200, Richey/Lambert’s Sage Spinner in the 400, Circle’s Tugg Taylor in the 800, Richey/Lambert’s Matthew Ellerton in the 1600 and 3200, Plentywood’s Chandler Hudson in the 110-meter hurdles and 300-meter hurdles, Circle’s 1600-meter relay team, Plentywood’s Cameron Brusven in the shot put, javelin, triple jump and long jump, Fairview’s Hunter Sharbono in the discus, Plentywood’s Nate Overby in the high jump and Scobey’s Ty Leischner in the pole vault.

Other girls earning divisional titles included Savage’s Brooke Reuter in the 100, 200 and 400, Scobey’s Mia Handran in the 800, Whitewater’s Shelbi LaBrie in the 1600, Plentywood’s Annie Kaul in the 3200, Circle’s Grace Gackle in the 100-meter hurdles, Fairview’s Teigan Taylor in the 300-meter hurdles, Saco’s 400-meter relay team, Scobey’s 1600-meter relay team, Plentywood’s Emma Brensdal in the discus, Saco’s Jaycee Erickson in the javelin and pole vault, and Saco’s Teagan Erickson in the high jump, triple jump and long jump, The state track meet is Friday, May 27, and Saturday, May 28, in Great Falls.