Japan: A Glimpse At Montana’s Future? 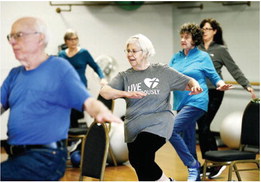 How The World’s Oldest Nation Cares For Its Elderly

( Publisher’s Note: This is part 1 of a two-part story about financing elder care in aging populations. Part 2 — what new strategies could Montana explore? — will be published next week.) Montana, the oldest state in the western United States, faces many of the same problems as Japan, the world’s oldest country. Might there be solutions for Montana from what looks to be a successful experiment enacted two decades ago to help pay for elder care in Japan?

On April 1, 2000, a new law in Japan began the world’s largest and most radical longterm care program for the elderly.

It was a surprising development to many outsiders, because although it was wellknown that Japan was, and remains, the world’s oldest country, the government had a reputation for not doing much about the issues raised by that demographic fact. In Japanese society, the burden of caring for the elderly has historically fallen on the shoulders of family members, especially women. For example, the wife of any given family’s eldest son often takes care of his parents. Elderly people often live in the same home as the eldest son or one of the daughters.

The program, called Kaigo Hoken (care insurance), is essentially a socialization of elder care through mandatory social insurance. Every citizen over the age of 40 with an income must contribute a monthly premium of $30-$50, depending on income. Then, everyone over the age of 65 is eligible for benefits in the form of care. The range of available services depends on a recipient’s level of disability, but the law pays for trips to adult day care centers, hospice care, medical care and in-home care such as cooking and cleaning.

After two decades, the $100 billion program has become 'very popular,” said Naoki Ikegami, a professor in the School of Public Health at St. Luke’s International University’s Center for Clinical Academia in Tokyo. “For both the middle-aged and the young, it’s very popular because it has taken care of their parents. Japanese society can’t exist without [the law] now.”

John Campbell, a professor emeritus of political science at the University of Michigan, is one of America’s foremost experts on Japanese health care and policy implementation. He’s the author of several papers and books on the topic, including “Medical Care in Japan” for the New England Journal of Medicine and “How Policies Change: The Japanese Government and the Aging Society” for Princeton University Press.

“The program was overwhelmingly popular with people,” Campbell said. “Even among big businesses or people that would have to pay more in taxes, they never really opposed it. Big companies were very worried about increasing health care spending, and the government argues that if we provide decent long-term care, it can reduce the burden on health care spending.”

That’s because, Campbell said, the care that the law pays for keeps elderly people physically active and less socially isolated. “They’re in better shape, they’re eating well, they’re doing chores and staying active,” he said. “It’s not true that it saves enough in health care spending to pay for all of these social programs, but the financial side of how much it was going to cost never got to be that big of an issue.”

Campbell said the law has become the “third pillar of social policy” in Japan, along with the pension system and the health care system.

“Nobody would ever think about overturning the law,” he said. “It’s as popular as Social Security is in America, or Medicare. Japan is the oldest country in the world. There’s more and more old people, and just because of that, actual spending goes up, fewer younger people are paying premiums, so there’s financial problems with it. Now they’re looking at reduced services for people that are not frail at all, so they’ve cut back payments but they’re keeping the core of the program solid.”

Another reason the law generated so much support, Campbell explained, is because the younger generation of women didn’t want to shoulder the burden of elder care as previous generations had for centuries in Japan.

“The women’s movement was very much in favor of it,” Campbell said. “It was a very big thing among Japanese women, the burdens of having to care not only for their parents, but the wife of the oldest son would have to take care of her husband’s parents.”

The conflict between a woman and her mother-inlaw became a staple of Japanese fiction, Campbell noted.

“There’s a feeling of burden,” he said. “The only people that were against the law were very conservative people who said this is going to destroy the Japanese family system. They said [having the wife of the oldest son provide care for his parents] is a wonderful part of Japanese culture, and you’re sort of doing away with it by having people being taken care of by home helpers. Those concerns were mainly only voiced by mostly politicians in the conservative party.”

Even so, Campbell said, few people in Japan thought the law would be popular at first.

“It was called the Gold Plan,” he explained. “It was

Seniors take part in an exercise class at the Missoula Family YMCA in this file photo from 2019. According to a Montana Free Press analysis of median age statistics from the U.S. Census Bureau, Montana is the oldest state in the western United States.

(Credit: Tom Bauer/Missoulian file photo) this big idea of how [Japan] would subsidize and pay for all sorts of long-term care, home-based care for older people. The Gold Plan won the election. It was a nice campaign ploy, but they didn’t think people were going to take it at all seriously.”

The law was initially supposed to be in effect for only 10 years, he said.

“It turns out they threw this plan together with no forethought,” Campbell said. “It was kind of a Trump kind of a plan. But there was a great deal of demand in society for these services, and pressure on local governments built up to pass a new Gold Plan to raise the level of services they were going to give.”

What happened, in essence, was that older people loved the care they were getting and younger people were happy to pay a reasonable amount for the care of older family members. A new social tax became almost universally embraced.

Next week: Could a mandatory elder care insurance program work in Montana?