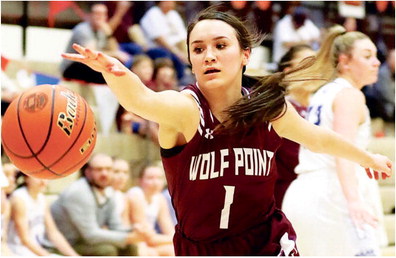 Two District 2B teams and one from District 1B qualified the State Class B Tournament at Butte Thursday through Saturday, March 12-14.

The Malta M’etts won the divisional title and a No. 1 seed at the state tournament. Shelby finished second and Harlem third. Wolf Point finished sixth at the divisional.

Malta topped Shelby 47-38 in the championship game and Harlem beat Glasgow 67-49 for third and fourth place.

The Lady Wolves entered the divisional a No. 4 seed with an opening game with District 1B No. 1 seed Fairfield. While the Lady Wolves outscored the Eagles in the second and third stanzas, Fairfield led with quarter scores of 19-5 and 18-4 in the first and fourth periods for a 21-point, 57-36 win.

The opening-round loss put the Lady Wolves in the consolation bracket where all games are loser-out.

The Lady Wolves outlasted the Northern Stars 49-47 in a game with three close quarters and a 16-9 Rocky Boy third quarter.

Mya Fourstar poured in a game-high 22 points for Wolf Point.

The win over Rocky Boy kept Wolf Point alive in the tournament with a big hurdle to clear that could have put the Lady Wolves in the thirdplace game. The winner of that game earns a state tournament berth. The third-place game wasn’t meant to be for Wolf Point. For the second time at the divisional, Wolf Point took a loss in a game where the Lady Wolves had led two quarter scores. The tallies were: quarter one, 15-9 Harlem; two, 14-13 Wolf Point; three 21-6 Harlem; and fourth, 17-14 Wolf Point. The final was 63-46 with Harlem winning the loser-out game. For Harlem, beating the Lady Wolves opened the door for the thirdplace contest that ended with a Harlem win over Glasgow and a No. 3 seed at the state tournament.

“Overall, it was a nice divisional tournament for us. It was nice to get the Rocky Boy win,” head coach Brent Nygard said. “It’s going to help our young players for next year gaining that experience.”

“We played Harlem Saturday morning and played them tough. We just had a tough time rebounding the basketball,” Nygard said.

“I was really proud of how these girls competed all weekend,” he said.

The Lady Wolves are a young and upcoming team after graduating six seniors in May 2019 that played in the 2019 state tournament. The current roster is about half underclassmen. There are five sophomores. One starter is a freshman and other freshmen have had playing time.