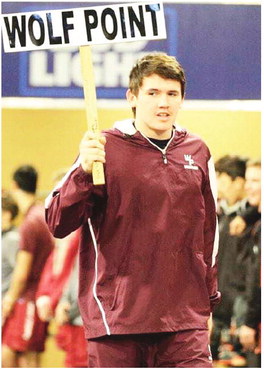 Garfield qualified for state at the Eastern B/C Divisional at Huntley Project Feb. 8.

“We were up 8-0 and got into a scramble with him and had him on his back. He had got our head in a bad spot, got rolled through and we caught. It’s just one of those things that happen at the state meet. There are no easy matches at that level,” he said.

“[Garfield] then had a [opponent with a] medical forfeit and advanced to the third round, a senior from Simms who was a No. 1 seed from the north. That was one heck of a match to say the least. We got some revenge from last year and got a 9-8 victory to advance to Saturday,” Vandall said.

A blood round match followed with a St. Ignatius senior. Garfield got caught in a scramble in the third period.

“We were right where we wanted to be within sticking distance and got caught scrambling,” Vandall said.