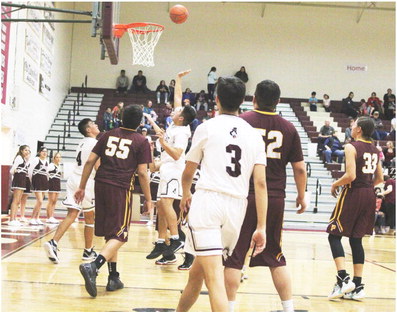 The Wolf Point Wolves basketball team has moved into second place in District 2B with three consecutive conference wins in the Wolvesâ€™ Den over Glasgow, Poplar and Harlem, the league leader that was previously unbeaten in 2B play.

Coming off a 20-point 65-45 win over the Glasgow Scotties Saturday, Jan. 18, the Wolves continued playing with high intensity, defeating the Poplar Indians 78-54 Friday, Jan. 24, and stunning Harlem with a 58-51 comeback win Saturday, Jan. 25.

Lance St. Germaine posted a game-high 26 points in the Harlem game. He shot six of eight from the free throw line.

In the Poplar game, St. Germaine poured in 19 points, followed by Tade Wallette with 18, Manning with 14 and Treyton Lilley with 10.

Poplar outlasted Malta 51-50 in another District 2B game at home Saturday, Jan. 25.

[Iâ€™m] â€śproud of my boysâ€™ effort,â€ť Wolf Point head coach Troy Blount said. â€śOur hard work is starting to pay off and the boys are starting to figure it out. We are really starting to gel and at the right time, too.â€ť

â€śWe played a good game on both ends of the floor,â€ť Poplar head coach Frank â€śBoshâ€ť Gourneau III said. â€śIt was great team basketball and my players worked hard from start to finish.â€ť

â€śWe went down by 16 in the third but chipped away at the lead and ended up pulling out the win [over Malta],â€ť Gourneau said.

â€śWe are slowly fixing things that need to be fixed and starting to improve on both sides of the ball. Our defense was really solid as we played a good physical team. We will continue to work in practice and game by game,â€ť he said.