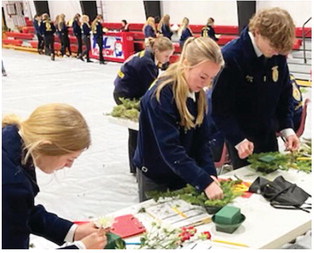 The Froid FFA program came away with first-place honors from the district floriculture competition held in Lambert on Monday, Dec. 4.

Members of the first-place team were Kaylee Olson, Carolyne Christoffersen, Addison Elvsaas and Cian Logan. There were 42 teams at the meet.

During the team activity, students made a boutiner and a corsage along with this arrangement.