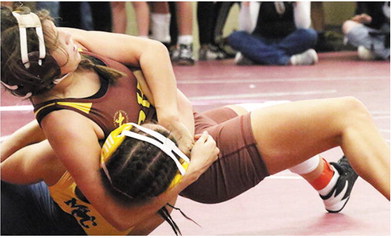 Poplar’s wrestlers opened their season with a solid showing at the Eagle Invitational in Sidney on Friday, Dec. 2, and Saturday, Dec. 3.

The Indians scored 15 points in the boys’ large meet that included a team from California and another from Ohio.

Kacie Colgan posted a 4-1 record for third place in the girls’ 120-pound division. She pinned Miles City’s Mayse Fox in 3:51 in the third-place match.

Travis Pribbernow placed sixth at 170 pounds in the JV meet.

On Friday during dual action, the Poplar/Wolf Point team earned first in its pool and second overall in the small team division. Highlights included Navarjo Escarcega going 4-0 and Angelina Escarcega posting a 2-2 record against boys.