Rutledge Sentenced To 50 Years In Prison For Incest 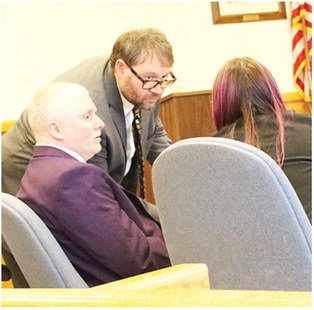 Richard Lamar Rutledge was sentenced to 50 years in Montana State Prison for two counts of incest at the end of a nearly three-year sentencing hearing in Wolf Point on Thursday, Nov. 17.

The sentence by District Judge David Cybulski includes a parole restriction for 25 years and that Rutledge will be registered as a tier 2 sexual offender. He will receive credit for time served. The two sentences are to run concurrently.

Cybulski urged Rutledge to take the time in prison and treatment to improve his life. He said that if Rutledge makes significant strides, a judge might reduce the 25-year parole restriction.

“I really do want you to come out and have a good life,” Cybulski said.

Prior to the sentencing, Rutledge made a statement where he said he takes full responsibility for the two charges.

“I sincerely apologize to the court for my actions,” he said.

Providing testimony on behalf on Rutledge during the hearing were his wife, sister, a close friend and a local pastor.

In her closing arguments, Selene Koepke of the Montana Attorney General’s office stated the State’s view that the sentence for each count should be 50 years, to run concurrently.

Koepke said Rutledge made parole violations and had chances of rehabilitation in the past. She said that Rutledge’s statement was full of self-pity.

She said the defendant was responsible for most of the delays in the trial process. Rutledge denied that claim.

Public defender Amanda Gordon argued for a sentence of 60 years with 55 years suspended to run concurrently. She noted that Rutledge would have supervision for the rest of his life.

Gordon said that Rutledge has family support and a history of employment. She said Rutledge is not a predator and that he has taken full responsibility.

According to court documents, Rutledge had sexual contact with his stepdaughters while they were under the age of 16 years of age. The offenses occurred in Roosevelt County while Rutledge was living in Culbertson. The defendant was more than three years older than the victims.

The often delayed trial for Richard Rutledge was scheduled to begin on Monday, July 18, in the district courtroom in Wolf Point until a plea agreement was agreed upon. Rutledge was facing the charges of two counts of sexual intercourse without consent and two counts of incest.