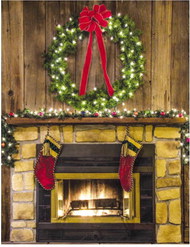 Private homeowners tend to hang the holiday lights outside their homes around Thanksgiving weekend and keep them up through New Year’s Day. Though it might seem like a tradition without a deep history, decorating a Christmas tree with electric lights can be traced all the way back to the nineteenth century. In 1882, Edward Johnson, who was a friend and colleague of the man who invented light bulbs, Thomas Edison, replaced candles, which had traditionally been used to briefly light Christmas trees, with light bulbs. But at the time of Johnson’s innovation, the high cost and relative infancy of light bulbs ensured the idea did not catch on. And though United States President Grover Cleveland used electric lights to illuminate a Christmas tree in the White House in 1895, it would be another eight years before General Electric would begin selling Christmas light kits. Those kits cost $12 in 1903, which equates to several hundred dollars today. The first outdoor Christmas light shows started to become popular in the 1920s, and this is the same time when commercial sales of Christmas lights picked up. In the 1960s, GE’s decision to begin manufacturing Christmas lights overseas helped reduce the price of outdoor lights even further, thus paving the way for the tradition of decorating home exteriors with string lights during the holiday season to take a firm hold. And that tradition remains wildly popular today.