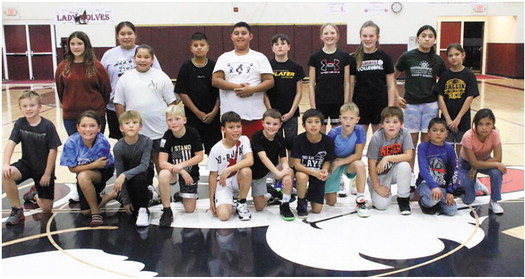 There were 26 participants during Sunday’s local event. Most of the shooters were prior school winners from Northside, Wolf Point Junior High, Southside, Vida, Frazer, Frontier or Poplar.

Louise Petersen served as the event’s coordinator. She thanked volunteers for making the activity a success.

“Louise did a good job,” Elks Exalted Ruler Jeff Presser said. “We had an awesome group of volunteers.”

The three different age groups were 8-9, 10-11 and 1213. The top boy and girl from each age division qualified for the regional meet to take place in Glendive during January.

In the boys’ competition, Matthew Nasner hit 20 shots for first place in the 8-9 age division. Gabe Uy took second and Kendrick Escarcega was third. Reed Garfield was the winner and Gaige Norgaard took second in the 10-11 age division. Andrew Williamson earned first place and Payton Williams was second for the 12-13 age group.

Medals were presented to the top three in each age group. First-place individuals also received T-shirts.