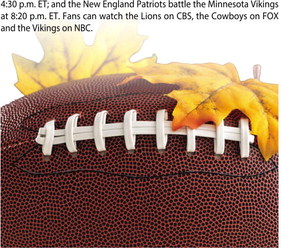 Thanksgiving is as synonymous with football as it is with turkey.

When sports fans tune into the big games Thanksgiving day, two teams are on the field every year: the Dallas Cowboys and the Detroit Lions. There is no rule in place that says these teams have to play on Thanksgiving, but it has become tradition. When the National Football League makes its Thanksgiving schedule each year, the Lions get scheduled for an early afternoon game and the Cowboys a late afternoon matchup. These traditions can be traced back to publicity stunts to draw in more fans. The Lions played their first Thanksgiving game in 1934, while the Cowboys started the tradition in 1966. Other teams had played on Thanksgiving prior to these years, but the Lions solidified their place when then-owner George A. Richards (also an NBC-affiliated radio station owner) established a contract with NBC to show his Lions games on Thanksgiving across 94 stations. In 2022, there is once again a tripleheader on Thanksgiving day. The Buffalo Bills will play the Detroit Lions at 12:30 p.m. ET; the New York Giants will play the Dallas Cowboys at 4:30 p.m. ET; and the New England Patriots battle the Minnesota Vikings at 8:20 p.m. ET. Fans can watch the Lions on CBS, the Cowboys on FOX and the Vikings on NBC.