Cowboys Roll On With Quarter-final Win Over Superior 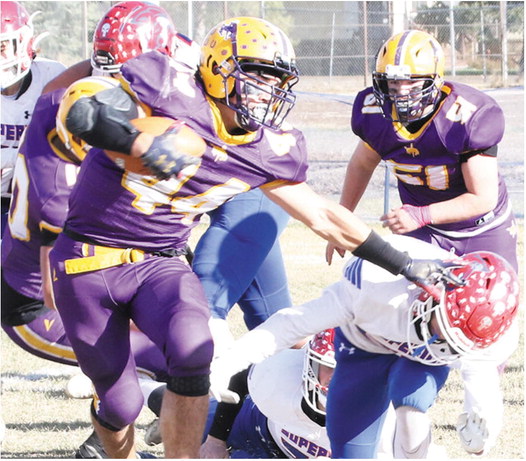 The Culbertson Cowboys realized to have success in their quarter-final round playoff game against Superior, they were going to need to rely on the running attack led by tailback Kobe Nickoloff and fullback Justice Bengochea.

Nickoloff finished with 266 rushing yards and Bengochea added 113 yards. The result was the Cowboys scoring a 56-34 victory.

The win was Culbertson’s first in the quarter-final round since 1973. The Cowboys will now head to Belt for a semi-final battle on Saturday, Nov. 12. “It feels amazing right now,” Culbertson Coach Brian Manning said after the victory. “To win and get over the hump is nice.”

Peyton Perkins, who set up Culbertson’s first touchdown with an interception, added, “It means a lot. It was amazing.”

Manning credited an outstanding effort by Culbertson’s linemen to open holes for the Cowboys’ rushing attack.

“It was a good job by the line overall. Everybody in the state knows we will run the thing and we’re still able to do it,” Manning said.

Perkins, who was one of the offense’s blockers, noted, “Our side and the other side opened holes, but Kobe does a lot on his own too.”

After Perkins’ early interception, the Cowboys went on to score on a four-yard run by Nickoloff at the 9:45 mark. Nickoloff also ran in the conversion for an 8-0 lead.

Culbertson’s next possession started at midfield and the Cowboys quickly went to the Superior 19 on a 21yard dash by Nickoloff. After Bengochea battled his way to the one, quarterback Bridger Salvevold reached the end zone. Nickoloff ran in the conversion for a 16-0 advantage.

The Bobcats got right back into the contest with a 48-yard, eight-play scoring drive. Decker Milender took a direct snap and ran in from the two to cap the drive and close the margin to 16-6.

The Cowboys responded by using the running ability of Nickoloff to drive deep into Superior territory. After Salvevold picked up a first down at the 11, Perkins battled to the four. Perkins, playing fullback on the drive scored from there to put the Cowboys up 22-6 with 49 seconds left in the opening quarter.

Solid defensive plays by Reece Moon and Tucker Finnicum then forced Superior to punt away the football. The Cowboys reached the end zone on a 40-yard run by Nickoloff for a 28-6 advantage.

Superior, using a series of short passes, stayed within reach with another scoring drive. The Bobcats pulled to 28-12 on a two-yard run by Jaxson Green with 4:28 remaining in the half. Culbertson’s final touchdown of the half came on a 10-yard gain by Nickoloff with 56 seconds remaining. The half ended with the Cowboys enjoying a 34-12 lead.

Superior’s first possession of the third quarter was stopped thanks to nice plays by Coln Avance and Carson Solem. Taking over at the Bobcat 31, the Cowboys marched toward the end zone on runs by Bengochea and Nickoloff. On third down at the 14, Nickoloff scored with 5:52 left in the period. Solem ran in the conversion for a 42-12 margin.

A 57-yard run end run by Milender set the Bobcats up at the Culbertson 10. The Bobcats went on to score on a one-yard run by Chase Woodson.

The Cowboys’ offense, however, kept rolling as the next touchdown came on a 22-yard dash by Solem to put the margin at 48-20 with 3:39 left in the third quarter.

After Superior’s next drive was stopped on two tackles by Mark Kirkaldie, the Bobcats got a break when Wyatt Haworth recovered a fumble inside Culbertson territory. Superior went on to score on a nine-yard gain by Orion Plakke to cut the margin to 48-26 with 33 seconds remaining in the third quarter.

With the wind getting stronger as the game went on, the Cowboys added a touchdown on a run from the one by Nickoloff with 8:37 remaining. Superior scored a late touchdown on a threeyard run by Lucas Kovalsky with only 19 seconds left.