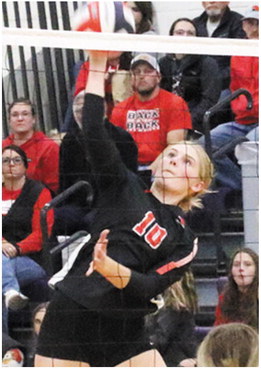 With their season on the line, the Froid/Lake Red Hawks came up with the comeback of their lives at the Eastern C volleyball divisional tournament in Culbertson on Friday, Nov 4.

The Red Hawks appeared in big trouble when they lost the opening two sets and trailed 8-6 in the third set. The amazing comeback started when a tip by Baylee Davidson, a block by Carolyne Christoffersen and an ace by Aleah Johnson put Froid/Lake ahead 9-8.

The serving of Mara Salvevold and net play of Dasani Nesbit led the way to a 15-11 advantage. The Hawks, however, grabbed a 17-15 upper- hand. With the score even at 21-21, the Red Hawks earned two points on kills by Christoffersen. Another kill by the senior produced a 24-23 lead.

After Broadus tied the third set at 24-24, the Red Hawks stayed alive with a kill and a block by Nesbit for a 26-24 win.

Froid/Lake gained a 14-9 advantage in the fourth set as action was highlighted by the net play of Nesbit, Jaeleigh Davidson and Christoffersen.

Ahead by a 15-11 margin, the Red Hawks struck for six straight points including three strong serves by Salvevold and a block by Nesbit.

After a strong net play by J. Davidson put the gap at 2314, the Hawks battled back to as close as 24-20. The Red Hawks ended the fourth set on a kill by Salvevold.

In the fifth and deciding set, the Red Hawks trailed 4-0 before the play of Christoffersen led the charge to a 4-4 deadlock.

Down by an 8-5 margin, the Red Hawks pulled even on three kills by Nesbit. Another kill by Nesbit produced a 10-9 advantage.

With the score deadlocked at 10-10, Froid/Lake accounted for the next three points including one on a kill by Salvevold.

Broadus cut the gap to 13-11, but the Red Hawks earned the last two points including one on another kill by Salvevold.