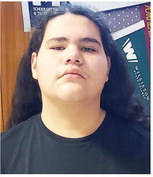 Culbertson High School senior Sabastian Granbois tries to work hard on his classes in order to have a bright future.

Granbois’ normal day of school begins with a bus ride from Poplar.

After spending some time in Texas, Granbois says that he is pleased to be attending school in Culbertson.

“I like the fact that they have more to offer me in school,” Granbois said.

His favorite classes have included accounting and principles of marketing and finance. “I’m pretty good in math and like doing that,” Granbois explained.

“He really know what he’s talking about,” Granbois said.

He said that he finds learning about government and politics to be interesting.

After graduating from high school, Granbois will work in the area for a year. Then, he plans to enter a HVAC training program.

Granbois says he will live in Eastern Montana at least for the next couple of years. “Maybe I will move down the road,” he said.