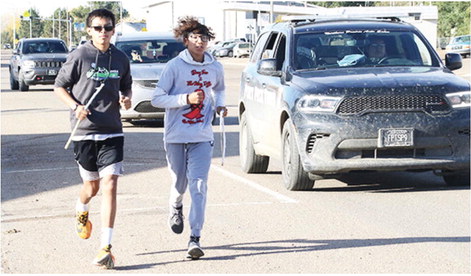 Students from throughout the area participated in the annual Red Ribbon Run to recognize Red Ribbon Week on Tuesday, Oct. 25.

Runners from Nashua, Frazer, Wolf Point and Poplar covered the western part of the Fort Peck Reservation along Highway 2. Brockton’s students ran from the east end of the reservation heading west.

A program was held at Poplar School to recognize the top runners and provide a meal. Door prizes and informational booths were also offered.

Since its beginning in 1985, the Red Ribbon has touched the lives of millions of people around the world. In response to the murder of DEA Agent Enrique Camarena, angered parents and youth in communities across the country began wearing Red Ribbons as a symbol of their commitment to raise awareness of the killing and destruction cause by drugs in America.