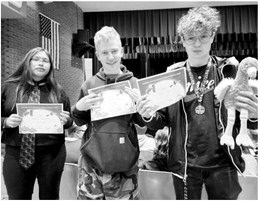 The Culbertson speech, drama and debate travel season officially started on Saturday, Oct. 29. Coach Jeri Gustafson said the team got an early start on its first competition. “Our Culbertson team was up and on the bus at 5:30 a.m. as we headed west for the Scary Scottie Invitational hosted by Glasgow High School,” said Gustafson. “We only had six students traveling on Saturday as some of our teammates were otherwise occupied with football playoffs, volleyball and other prior obligations. The six we did have taking part in the competition did an excellent job of representing CHS.”

“I am happy to say that our speech and drama numbers have increased dramatically from the past two years,” Gustafson said. “I am hoping to have up to 20 participating by the end of the season.”