The final run during the Frazer Invitational on Tuesday, Oct. 4, was a time for students to cheer and relax while older individuals, including many coaches, took to the challenging course.

The coaches’ or old-timers’ race featured about 10 brave participants, most of them no longer accustomed to racing against others.

Frazer’s athletic director Cody Larson said the idea for the 1.5 mile run was suggested by the school’s superintendent Melanie Blount-Cole.

“I said sure, that sounds great,” Larson said when he was told of the idea.

Larson didn’t finish near the front of the pack, but he was probably the most enthusiastic runner at the start and the end. of the 1.5 mile run.

“I try to go each morning on the old-timers’ trendmill,” Larson said of his conditioning.

Coaches Chance Hyatt of Culbertson/Bainville and Cole Baker of Wolf Point weren’t aware of the special run prior to the meet at Clark’s Hill. Both said they haven’t been working out a great deal, but they were willing to participate.

Hyatt was a two-time state cross country champion during his high school career and also won state titles in the 1600 and 3200 for track. He returned to his winning ways by finishing first in Frazer on Tuesday.

Baker was a little more nervous prior to the race. “Everybody was talking about it,” Baker said. “I guess I have to now.”

After being cheered on by Wolf Point students during the run, Baker was very glad that he went through the experience. “It’s one of my favorite courses, so I wanted to run it,” he said.

Wolf Point’s Sierra Summers was also happy that the run for old-timers was offered. Summers earned honors in both cross country and track during her high school career in Wolf Point and Frazer.

“I just got back into running a year ago,” Summers said. “I’m actually faster now that I’ve ever been.”

During the past year, she has raced at competitions in Billings, Fort Peck, Hardin and Glendive. She broke her personal record in Hardin for the 5K with a time of 19:21.

“He’s obviously is way ahead of me,” Sierra said. “He’s the one who encouraged me to start running again.” 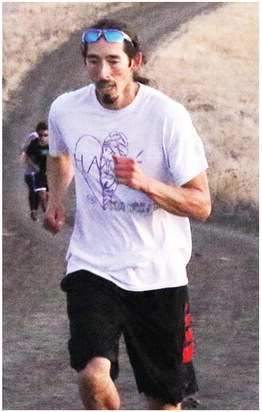 BakerWolf Point’s Cole Baker takes on the hill during the old-timers run at the Frazer Invitational.(Photo by Bill Vander Weele)