After dropping the first two sets of the non-conference match, the Wolves battled back to score two exciting wins in the next two sets.

J’Elle Garfield led the Wolves with 12 kills. Leading the team with 11 assists each were Kylie Rodenberg and Mahala Moran. Sierra Hamilton serve 10 aces. Rodenberg and Joli Beston had two blocks each. Katelyn MacDonald accounted for 24 digs.

The Wolves will host Scobey on Thursday, Oct. 13, and head to Harlem on Saturday, Oct. 15.

Wolf Point’s Sierra Hamilton tips the ball over during the match in Malta. (Photo by Pierre Bibbs, Phillips County News) 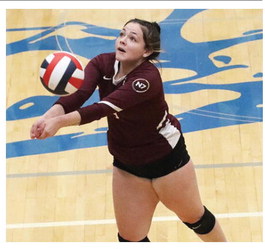