Native American Week was capped off for Wolf Point students with the traditional Wolf People celebration on Thursday, Sept. 22.

The host drum was the Fort Peck Sioux. Serving as emcee was Lance Fourstar.

Patricia Payne, who organized the event with Northside principal Georgie Gourneau, said the school powwow has been held for more than 20 years.

Because of rainy weather conditions, this yearâ€™s celebration took place at the community center instead of the Wadopana Celebration grounds.

â€śCulture is passed down through our generations,â€ť Payne said of the importance of Native American Week. â€śItâ€™s up to teachers, the community, parents and schools to express the importance of our legacy, value system and our identity.â€ť

Payne explained that Native American Week was a busy time for all of Wolf Pointâ€™s schools. Programs at Northside school included Justin Gray Hawk Sr. talking about the importance of the drum, Lenora RunsAbove discussing the importance of native plants and Vermae Taylor speaking about the value of prayer. Storytelling and a video on the Fort Peck Tribes were also parts of the lessons. 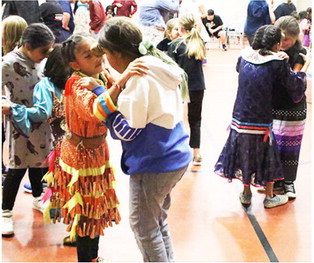 Potato DanceChildren take part in the potato dance during the celebration for Native American Week on Thursday, Sept. 22.(Photo by Bill Vander Weele)