Teacher Tressa Welch, who organized the assembly, said she believes itâ€™s the first time that local students heard from only female leaders as one of the weekâ€™s activities. She noted that traditionally women are taught to listen and not to be in the forefront.

Women like those at the assembly, however, are stepping up into leadership roles. Common themes were the importance of education and giving back to their communities.

â€śThese women know how important unity is,â€ť Welch said to the students. â€śWe falter and make mistakes, but we grow.â€ť

The various speakers included one school board member and three Tribal Executive Board members.

Lanette Clark said this is her seventh year on the Wolf Point School Board and is nearing her 31st year working at the Fort Peck Community College.

â€śThatâ€™s what I want you to do, go out and succeed,â€ť Clark said to students. â€śPay attention today so your life is easier down the road. Strive for higher education. Thatâ€™s your power.â€ť

TEB members who were speakers were Carolyn Brugh, Shannon Dionne-Martell and Stacey Summers.

Brugh, who is serving her third term on the council, was born and raised in Brockton.

â€śWeâ€™re here to set a trail,â€ť Brugh explained to students.

She stressed that every goal is attainable, but people have to believe in themselves.

Summers, who is in her third term as a council member, grew up in Fort Kipp. She notes that the tribal council believes in supporting youth.

â€śI encourage you to get your education, your degree,â€ť Summers said. 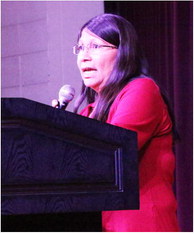 ClarkWolf Point School Board trustee Lanette Clark was one of the speakers during an assembly for Native American Week.(Photo by Bill Vander Weele)