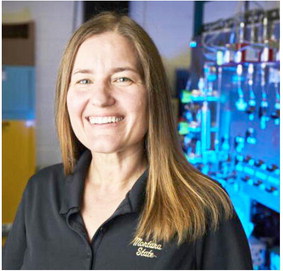 As a result of new research involving a cutting-edge facility at Montana State University, agricultural biomass that would otherwise sit in farmersâ€™ fields could instead be turned into plastic beverage bottles and food containers.

Stephanie Wettstein, associate professor in the Department of Chemical and Biological Engineering in MSUâ€™s Norm Asbjornson College of Engineering, is leading a project to develop improved methods of making a bio-based plastic called PEF, similar to the PET plastic commonly used for food packaging. The work is backed by a threeyear, $450,000 grant from the National Science Foundation.

â€śThereâ€™s some production of PEF, but significant limitations in the process of making it,â€ť Wettstein said. â€śItâ€™s a hard problem to solve, and weâ€™re looking at it in a way that nobody has before.â€ť

The project aims to find a better way of turning the sugars in biomass, like that left over after harvesting oil seeds of camelina, into an intermediate chemical called 2,5-furandicarboxylic acid, or FDCA, that can then be made into PEF. Currently, the reaction requires significant amounts of water, making it difficult to produce the bioplastic economically. Wettsteinâ€™s previous work exploring organic solvents for deriving useful chemicals from biomass suggests that thereâ€™s considerable room to boost the efficiency of the reaction, she explained.

â€śBy improving the yield of that middle step to produce FDCA, weâ€™d really be able to support an industry geared around making PEF,â€ť Wettstein said.

In MSUâ€™s Montana Microfabrication Facility, Wettsteinâ€™s team will use a recently acquired technology called an atomic layer deposition machine to make catalysts out of metals such as platinum and ruthenium that react with the liquid solution of plant sugars to form FDCA. Then, in her lab, the researchers will use the different catalysts and experiment with various organic solvents to try and optimize the reaction.

Efficient, economical PEF production would have many benefits, including creating new markets for agricultural producers and reducing carbon emissions and other environmental impacts associated with traditional manufacturing of plastic from petroleum, according to Wettstein. PEF is easily recyclable, she said, and in many cases is preferred in packaging because itâ€™s less permeable to oxygen and therefore keeps food fresher.

Wettstein worked for several years in industry before earning her doctorate in chemical engineering and joining the MSU faculty in 2012, so â€śitâ€™s no surprise that her research seeks to provide creative yet highly practical solutions to engineering challenges,â€ť said Abbie Richards, head of the universityâ€™s chemical and biological engineering department.

â€śThe highly practical nature of her research resonates with students because they can see how it will directly benefit society,â€ť Richards added. Wettsteinâ€™s work has supported more than 30 undergraduate student researchers in her lab over the past decade, and the new grant is expected to support research opportunities for two graduate students and a half-dozen undergraduates.

In addition to providing an outlet for residual crop waste, the bioplastic could provide markets for fast-growing crops produced specifically for biomass, such as intermediate wheatgrass, which is often used for hay production.