A July 26 ruling from the Montana Supreme Court found that the historic access road to the park “has and shall continue to provide access to the Legion Park Parcel to Legion, its invitees and the public.”

Pictures submitted by the Legion last week showed obstacles on and across the historic roadway.

Property owner Rhonda Knudsen spoke to the Northern Plains Independent at press time Sept. 6. She submitted photos of an alternate route to the park which she claims will remain open to public access. Knudsen and husband Miles Knudsen are members of Knudsen Family Limited Partnership, the named litigant opposing the Legion.

Legion member Pete Olson claims the move is another effort to block access to the park.

“It’s not the legal route,” said Olson, describing KFLP’s proposed alternative. Olson said he is waiting on a response from the District Court and possible action from the Roosevelt County Sheriff’s Office and the Roosevelt County commissioners. He said attempts to seek assistance from Piocos haven’t helped resolve the matter.

An email from Piocos to Olson dated Sept. 1 appears to relegate the dispute to civil court for further arbitration.

Piocos concluded his email to Olson by insisting the matter find resolution via additional legal actions.

In a letter to this newspaper, Knudsen made a case for using an alternate route to the park.

“During the lengthy private property disputes between the American Legion and the Knudsen Family Limited Partnership a previously unknown and unimproved county road right of way was discovered,” said Knudsen. “This ROW dates back to the early 1900’s and has been named Valley Co. Road 97 or just County Road 97. It was generally stated that since a county ROW is public property, by default it becomes part of any public access route. This ROW runs parallel to the road that was built by KFLP for farm field access and is literally just a few feet away.”

Olson contends that the move by KFLP is an attempt to muddy the legal waters and provide grounds for ongoing resistance to the Supreme Court ruling.

Knudsen said livestock necessitates fences and gates along the historic route. “This is a working operation,” Knudsen said. “Since the September court ruling, KFLP has been working diligently to move our agricultural operation buildings, fences and gates so that in no way can they be deemed an access impediment.”

Olson said an invitation has been extended to Piocos to attend the upcoming American Legion meeting Sept. 8 at 7 p.m. in Culbertson. 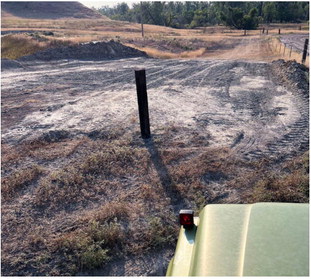 Alternate RouteRhonda Knudsen submitted this photo Sept. 6 showing an unimproved pathway which appears to skirt KFLP property. Knudsen says the route is one of many historic routes to the park area.(Submitted)