The Culbertson Cowboys exploded for 26 points in the opening quarter and defeated Poplar, 62-12, in eight-man football play on Friday, Sept. 2.

On Culbertsonâ€™s first offensive play, Bengochea broke loose for a 35-yard run to the Poplar 35. After Poplarâ€™s Zane Dupree made a solid tackle on first down, quarterback Bridger Salvevold connected with Reese Moon for a 34-yard touchdown pass. Salvevold ran in the twopoint conversion at the 8:43 mark.

The Cowboys were back in scoring position when a sack by Colin Avance and a tackle of the punter by Moon turned the ball over at the Poplar 11. On second down, Kobe Nickoloff scored from the three for a 14-0 advantage.

Culbertsonâ€™s defense then scored when Payton Perkins intercepted a pass and returned the ball 44 yards for a touchdown. Salvevold passed to Moon for the conversion to put the margin at 22-0 with 5:34 left in the first period.

A sack by Poplarâ€™s Walker Burshia put Culbertson in a second-and-21 situation. The Cowboys, however, reached the end zone on a 61-yard pass play from Salvevold to Moon. Bengochea smashed in for the conversion for a 30-0 margin.

The Cowboysâ€™ next score came on a nine-yard dash by Nickoloff with 2:39 left in the quarter. Salvevold passed to Mark Kiraldie for the conversion and a 38-0 lead.

The first points of the second quarter came on a safety when a snap went over the head of Poplarâ€™s punter and out of the end zone.

A 24-yard run by Solem put Culbertson back into the end zone. Salvevold battled in for the conversion to put the half-time margin at 56-6.

The Cowboys added a touchdown in the third down on a 32-yard dash by Solem for a 62-6 advantage.

Poplar accounted for the gameâ€™s final touchdown when quarterback Kameron Reum ran in from nine yards out with 7:27 remaining.

Offensive leaders for Culbertson included Solem with 63 and Nickoloff with 50 rushing yards. Salvevold and Moon connected on pass plays for a total of 95 yards.

Reum passed for 83 yards to lead the Indians. 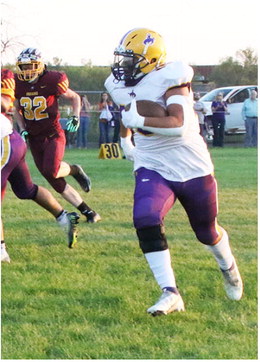