â€śI feel weâ€™re deeper than last year,â€ť coach Michael Reiter said of the 20-player team. â€śWeâ€™re going to miss the five All-State players, but we have others who can contribute a ton.â€ť

Leading the group of returning players is All-State performer Mason Dethman, a junior, at quarterback and defensive back.

Quinn Abar is another standout starter back, but the senior is recovering from a foot injury that might sideline him for the first couple of games.

Among the players who saw a good amount of varsity time last season are Austen Hobbs, Nate Stentoft and Cian Logan.

Other players who look ready to take on larger roles include Caden Kelm at fullback/linebacker, Joseph Robertson at back/safety, Landen Kelm at receiver/defensive back and Patton Bighorn at wide receiver.

Max Engelke, a senior, could contribute in multiple roles for the Red Hawks. â€śHeâ€™s an athlete,â€ť Reiter said.

Reiter, who is assisted by Jalen Henrickson and Ian Logan, feels the toughest competition in the league will come from Wibaux and Richey/Lambert.

The Red Hawks open their season with a tough nonconference schedule as Custer/Hysham/Melstone, Broadview/Lavine, Denton/Geyser/Stanford and Roy/ Winifred are each expected to be playoff caliber squads. 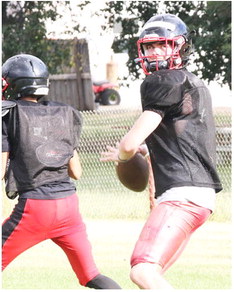