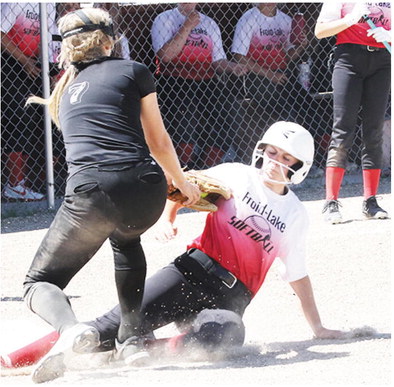 The Froid/Lake and Bainville softball teams each competed hard during the major softball league tournament held in Plentywood on Monday, June 27.

After falling to Bainville in the opening round, Froid/ Lake bounced back with a 21-6 victory over Crosby in loser-out action.

Bainville defeated Froid/ Lake but then lost a wellplayed 10-5 game against Wolf Point. The Bandits knocked off Poplar by an 18-3 final.

In the third-place game, Bainville earned a 15-9 lead during the top of the third. Elsie Wilson, Lakyn Rabbe and Kaelyn Romo crossed the plate for the last three runs of the frame.

Froid/Lake accounted for three runs in the bottom of the third, but a double play by Kendra Romo ended Froid/ Lake’s threat.

Two fouls balls caught by Froid/Lake’s catcher Aleah Johnson in the top of the fourth kept the game close at 15-12.

After Aiden Ator scored the first run in the last inning, Froid/Lake tied the game, 15-15, when a two-out infield hit by Jaleigh Davidson brought Addison Elvsaas and Johnson in.

Alicia Ator then connected for a hit to score Jazzmin Fugere with the game’s winning run.

Plentywood knocked off Froid/Lake in the second- place game.